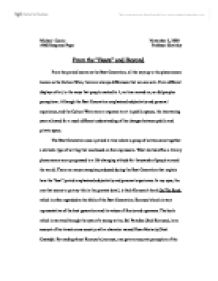 Michael Curcio November 2, 2008 AMS Response Paper Professor Skvirsky From the "Beats" and Beyond From the period known as the Beat Generation, all the way up to the phenomenon known as the Culture Wars, there are always differences that we can note. From different displays of art, to the ways that people reacted to it, as time moved on, so did peoples perceptions. Although the Beat Generation emphasized subjectivity and personal experience, and the Culture Wars were a response to art in public spaces, the intervening years allowed for a much different understanding of the changes between public and private space. The Beat Generation was a period in time where a group of writers came together a started a type of writing that was based on free expression. What started off as a literary phenomenon soon progressed to a life-changing attitude for thousands of people around the world. There are many examples produced during the Beat Generation that explain how the "beat" period emphasized subjectivity and personal experience. In my eyes, the one that seems to portray this in the greatest detail, is Jack Kerouac's book On The Road, which is often regarded as the bible of the Beat Generation. Kerouac's book is very representative of the beat generation and its values of liberty and openness. ...read more.

Throughout the book, Sal's personal experiences are used to portray the characteristics of life during the Beat Generation. In terms of the books representation of public and private spaces, I would say that Kerouac's book depicts the Beat Generation deeply through Sal's private life. Although the public knows about him, with regards to space, I think that the Beat Generation shows a time where individuals were just being individuals, and experiencing themselves through their own personal values. Although Jack Kerouac's book emphasizes subjectivity and experiences of the Beat Generation, there are many different perspectives of public and private space in the intervening years. In the years following the 1950 Beat Generation, artists began changing the realms of society by invoking expressive notions of their own. Maya Lin "was a senior at Yale University in 1980," when she began her endeavor as an expressive public artist (111 DPA). She sought to create art that would have a valuable meaning and expressive reaction; that was until she actually did receive a real public reaction of criticism. Although it may or may not have sparked the era known as the Culture Wars, the reaction that Lin received showed the ways in which different cultures disagreed with each other. "More importantly, [the] public culture displayed...the shared notions of civic virtue and the common ideals of the public good- what is best for the general happiness of the people and welfare of the republic" (55 CW). ...read more.

Through each one of her political establishments, Maya Lin's artwork was able to show some sort of change in the publics views of private and public space. No matter what years in history you are trying to compare, there is no doubt that as time goes on, art changes as well as the public's reaction to it. From the 1950 Beat Generation to 1990 Culture War era, there has been a definite change in art and public perception. During The Beat Generation, the views of public and private space differed much differently than the views of public and private space during the culture wars. I think that during the Beat Generation the public had an image of art, but didn't care enough to give it the criticism that future generations later would. During the Culture Wars on the other hand, no matter what happened, when public art was constructed, someone always tried to criticize it or have something negative to say. It was said that "both public culture and...'private culture' can be understood as 'spheres of symbolic activity,' that is, areas of human endeavor where symbols are created and adapted to human needs" (53 CW). Even though both generations were periods of change, the Beat Generations subjectivity and Culture Wars display of public art show just how different the notions of public and private spaces really were during each period. ...read more.