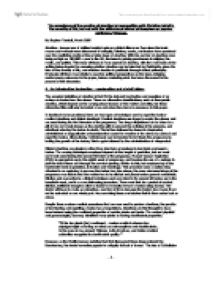 &quot;An acceptance of the practice of abortion is incompatible with Christian belief in the sanctity of life, but not with the attitudes of ethical philosophers or popular politicians.&quot; Discuss.

"An acceptance of the practice of abortion is incompatible with Christian belief in the sanctity of life, but not with the attitudes of ethical philosophers or popular politicians." Discuss. By Stephen Tunstall, March 2005 Abortion - forever one of civilised society's primary ethical dilemmas. Ever since the basic means and methods were discovered in antiquity, thinkers, courts, and leaders have pondered over the conflicting merits of the emotive issue of abortion. With the number of abortions now being as high as 180,0001 a year in the UK, the issue is gaining prominence in religion, the media, and politics. This essay will look at many aspects of abortion, with the main body of the writing being devoted to assessing whether abortion can be tolerated by Christianity, given the idea of the sanctity of life, and whether abortion is justifiable through ethical philosophy. Emphasis will then move briefly to examine political perspectives on the issue, bringing contemporary relevance to the paper, before concluding what has been discovered in the process of this discussion. A - An introduction to abortion - explanation and a brief history The accepted definition of abortion is that it's the induced termination and expulsion of an embryo or foetus from the uterus. There are alternative classifications, such as therapeutic abortion, which depend on the varying circumstances of the mother and child, but these alternative titles will only be looked at as and when they become necessary to this paper. If abortion is to be practiced, there are two types of technique used to expel the foetus - medical abortions and clinical abortions1. Medical abortions use drugs to empty the uterus, and are used during the first trimester of the pregnancy. The drug mifepristone can be taken as a pill (more commonly known as the abortion pill) to prevent the re-lining of the placenta, and effectively starving the foetus to death. This is then followed by doses of misoprostol, administered as suppositories or injections that cause the muscles of the uterus to contract and expel the foetus. ...read more.

Thus, abortion and belief in the sanctity of life are compatible in their eyes; their reasoning is outlined below. The idea that abortion is not murder because life indeed does not start at conception will be examined hereafter from a Christian perspective. Consider this scripture on the creation of Adam (NB. Breathing does not occur in a foetus; only after birth does a baby begin to breathe): "And the Lord God formed man of the dust of the ground, and breathed into his nostrils the breath of life; and man became a living soul."12 Note carefully the order of events. First, God created the physical entity, and then breathed life into it, and it is not until this happens that a baby becomes "a living soul". This indicates that life does not begin until birth, because ensoulment only happens when breathing begins, and thus abortion can not be murder. This is a persuasive argument, but there are a couple of criticisms to be drawn against it. Firstly, the verse must not be taken out of context. Adam, (and Eve), are unique inasmuch as they are the only humans, including the incarnated Lord, not to undergo the process of development in the womb. Adam's method of creation must therefore be considered an exception, because the aforementioned passages which refer to human development in utero, do not apply. Secondly, the interpretation of "breath" is unclear. Whether the meaning is literal, or metaphorical, is debatable. The author could simply be meaning that God suddenly induced life in Adam, and, using his imagination, likened this event to breathing to make it identifiable. There is also no distinction as to whether "breathed into his nostrils the breath of life" (read: the inducement of life) happened after the formation of the body, or simultaneously. Therefore, it is not a reliable source on which to base the assumption that abortion is not murder. ...read more.

37), this was an amendment of the Abortion Act 1967 B - An investigation into when human life begins 1 McFarlane, Graham; Moore, Pete "What is a Person?" Christian Medical Fellowship, 2000 2 Haring, Bernard "Medical Ethics", Fides Publishing, 1973 3 Ibid. 4 McFarlane 5 Ibid. 6 Haring 7 McFarlane C - The Christian perspective 1 The Didache, chapter 2 2 Genesis 1:27, KJV 3 1 Corinthians 6:19, NRSV 4 Aquinas elaborates on Aristotelian ideas of the nature of the soul and the idea of ensoulment in "Summa Theologiae", 1a, q. 118, c. 1077 5 Taken from the "What does the church say about... abortion" section of the website of The Catholic Church in England & Wales: http://www.catholic-ew.org.uk/faith/living/abortion.htm 6 Part (a) of a motion carried at the Synod debate on embryology, July 2003. 7 Psalm 139:13-16, NIV 8 Jeremiah 1:5, NIV 9 Psalm 51:5, The Jerusalem Bible 10 From an Abortion Briefing Paper issued by the Church of England's Mission and Public Affairs Division in February, 2005. 11 "'Serious foetal handicap' is as laid down by the Human Fertilisation and Embryology Act" as quoted from ibid. 12 Genesis 2:7, KJV 13 Matthew 19:19, KJV D - The philosophical perspective 1 As quoted in "Ethics and Religion", Jenkins, Joe; Heinemann Educational Secondary Division, 1999 2 Vardy, Peter; Grosch, Paul "The Puzzle of Ethics", Fount 1994 3 Nathanson, Bernard "Aborting America", Doubleday, 1979. Dr. Nathanson was one of the leading pro-choice activists of the sixties, before turning his personal ethical values on there head once legal liberalisation had been achieved. He is now one of the most outspoken critics of the practice of abortion, and is a leading pro-life campaigner. 4 Fletcher, Joseph "Situation Ethics: The New Morality", SCM Press, 1966 5 Lader, Lawrence "Abortion", Beacon Press, 1966 6 Bentham, Jeremy "Introduction to the Principles of Morals and Legislation", 1789 7 Thompson, Mel "Teach Yourself Ethics", Hodder & Stoughton, 1994 8 Lackey, Douglas P. "God, Immortality, Ethics: A Concise Introduction to Philosophy", Thomson Learning, 1990 E - The political perspective 1 As quoted in The Guardian, 16/03/2005 2 Michael Howard, ibid. 3 Ibid. ...read more.