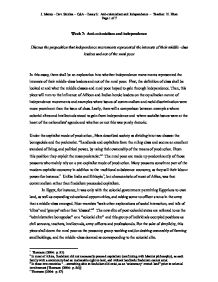 The Muslim elite had legitimate concerns for the plight of the Muslim rural poor, as they feared that a new majority Hindu democratic state would discriminate against all Muslims. However, the risk that "political power would shift in favour of other people who might be willing to put themselves at the head of the unemployed and landless"16 actually led to pre-empted demands for their own nation prior to the possible seizure and equitable re-distrubution of Muslim lands amongst the Indian population. This contrasts to the Mau Mau Rebellion in Kenya, where Kikuyus demanded "mixed farms in the highlands be transferred to Africans, beginning with some of the squatters and other unemployed and landless people from the towns and from the Kikuyu countryside."17 Furedi believed that the "leaders of the populist movements like Mau Mau were successful organisers because they lived near and with the African people, unlike educated Kenyan African Union politicans."18 Ironically, Kikuyu fighters having epitomised the impoverishment and frustration of the least economically secure Kenyans and their commitment to the cause of independence, gauranteed their relatively affluent, educated, middle-class tribesman a leading claim to governance following independence. For a long time, Europeans misunderstood or ignored African opposition, their views "influenced by an erroneous belief in their supposed superiority."19 British handing-over supreme control of independent South Africa to white-Afrikaners of European-origin rather than Black natives supports this. ...read more.

has been the target group for most of the agricultural development plans."39 However, the overwhelming majority of the people in the rural areas in Zambia, for instance, constitute the poor section of the Zambian peasantry, and it is regrettably "this section of the Zambian peasantry that leads a very precarious life." 40 This is due to them having been marginalised, first by colonial polices and then by those of the post-independence government which has worsened both neocolonialism and rural underdevelopment. As a class, the current "administrative bourgeoise" of past-colonial states have their historical roots within the colonial adminstration, as an educated African elite, they were employed by the colonial service to act as junior administrators and professionals. "As the group consolidated, this petty bourgeoisie of bureaucrats, doctors and teachers formed the backbone of the nationalist movements that won Africa's independence...and their reward at liberation was accession into their former colonial masters' jobs."41 There is a stark difference between the approach taken by independence movements in French colonial states compared to British colonial states. In the build up to independence, it appears the former adopts a concerted socialist approach where the interests of the rural poor are not neglected, whereas with the latter attempts to strengthen the economic position of the middle-class colonial elite by helping to "keep the peasantry trapped between the old and the new modes of production. ...read more.