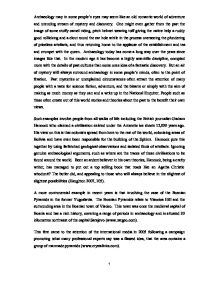 Archaeological Controversy. The Bosnian &quot;pyramids&quot;. Mr Osmanagic also thinks the findings around the hills of Viscocica will have further repercussions for prehistory. He compared the size of the biggest pyramids in the regions of Egypt and Mexico and st

Archaeology may in some people's eyes may seem like an old romantic world of adventure and unending stream of mystery and discovery. One might even gather from the past the image of some stuffy camel riding, pitch helmet wearing toff giving the native help a ruddy good rollicking and a clout round the ear hole while in the process overseeing the plundering of priceless artefacts, and thus returning home to the applause of the establishment and tea and crumpet with the queen. Archaeology today has come a long way over the years since images like that. In the modern age it has become a highly scientific discipline, occupied more with the details of past cultures than some ones idea of a fantastic discovery. But an air of mystery will always surround archaeology in some people's minds, often to the point of fixation. Past mysteries or unexplained circumstances often attract the attention of many people with a taste for science fiction, adventure, and the bizarre or simply with the aim of making as much money as they can and a write up in the National Enquirer. People such as these often create out of this world stories and theories about the past to the benefit their own views. Such examples involve people from all walks of life including the British journalist Graham Hancock who claimed a civilisation existed under the Antarctic ice sheets 12,000 years ago. ...read more.

Mr Osmanagic also thinks the findings around the hills of Viscocica will have further repercussions for prehistory. He compared the size of the biggest pyramids in the regions of Egypt and Mexico and stated they were all built by the same culture and the Bosnian examples being the conclusion of this enterprise (Ibid). Osmanagic then changed his view again by stating that the dating method used may not be 100 percent reliable and stated Visocica hill could represent the mother of all pyramids, which claims would be confirmed by the further study in of sacred geometry and the use of numerology of so called messages left behind in the pyramids (Ibid). His examination of the reputed Sun Pyramid revealed it to be some 722 feet high. If this was to be the case it would be nearly a third larger than the Great Pyramid of Giza and this would make it the largest structure of its shape in the world. Osmanagic also states that miners from the nearby Tuzla mine found ventilation shafts in the underground areas, stating that it shows the planning that went into the structure and also the level of engineering that the builders possessed (www.bosnianpyramids.org). Also two large man made sandstone blocks in a circular shape were discovered in a tunnel and were estimated to have a weight of around five tons each. ...read more.

to share his views on the subject he summed it up by quoting "The government does not stop or tear down illegal buildings in the parts of the historic town of Mostar that are on the UN World Heritage List! There is no effective law, anyone can do what he or she pleases" (www.natgeo.com). As a result of the pyramid controversy real archaeological work suffered for it. Funding from the government amounted to less than 100,000 dollars in the three years following the claim and genuine archaeological work has struggled because of it. While this may be the case with genuine archaeology, Osmanagics project has seen funding jump sharply, with large donations been raised and a promise from the government that further funding will be provided, which just happened to coincide with an election year at the time (Ibid). Semir Osmanagic has managed to cause such a tide of controversy with his claims and as result has brought the reputation of a national government into question. The government's role in the matter can only be seen as one of promoting pseudoarchaelogy as way of increasing tourist revenues and boosting the economy at the expense of genuine fact. The onus is on Semir Osmanagic to provide concrete evidence of his claim, in which up to now he has failed to provide. To prove an extraordinary claim one must produce extraordinary evidence and the only thing Semir Osmanagic seems to have produced is the perfect Pyramid Scheme. ...read more.