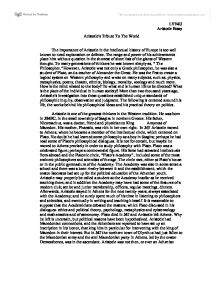 Aristotle. More than two thousand years ago, Aristotles investigation into these questions established unique standards of philosophic inquiry, observation and judgment. The following is centered around his life, the works behind his philosophical idea

Aristotle's Tribute To The World The importance of Aristotle in the intellectual history of Europe is too well known to need explanation or defense. The range and power of his achievements place him without question in the shortest of short lists of the giants of Western thought. To many generations of thinkers he was known simply as, " The Philosopher." However, Aristotle was not only a Greek philosopher, he was also a student of Plato, and a teacher of Alexander the Great. He was the first to create a logical system on Western philosophy and wrote on many subjects, such as, physics, metaphysics, poetry, theater, ethnics, biology, morality, zoology and much more. How is the mind related to the body? To what end is human life to be directed? What is the place of the individual in human society? More than two thousand years ago, Aristotle's investigation into these questions established unique standards of philosophic inquiry, observation and judgment. The following is centered around his life, the works behind his philosophical ideas and his practical theory on politics. Aristotle is one of the greatest thinkers in the Western tradition. He was born in 384BC, in the small township of Stagira in northern Greece. His father, Nicomachus, was a doctor, friend and physician to King Amyntas of Macedon. ...read more.

In 335 Aristotle returned to Athens. Platos Academy was flourishing under a new head, but Aristotle preferred to set up an establishment of his own, and while the Platonists walked and talked in the Academy, Aristotle did the same in the Lyceum. A dozen years later, Alexander the Great died, and shortly afterwards in 322, Aristotle left Athens. He did so, allegedly said, "in order that the Athenians might not commit a second hand crime against philosophy" in order that they might not condemn him to death as they had condemned Socrates to death. Aristotle retired to Chalcis, on the island of Euboea, where his mother's family had estates, and there in 322 B.C. he died of an unknown stomach illness. Did Aristotle view all or most of his works as parts of, or contributions towards, some systematic whole? Is there a such thing as Artotelianism? For centuries these questions were answered with a confident affirmative and you were then given an outline of the Aristotelian system of thought. Twentieth century scholarship had by and large preferred what seems to be a more sophiscated approach to the texts. It is a mere truism that Aristotle cannot have written all his works in the same week; and it is a fact that there are differences- perhaps even downright contradictions and inconsistencies among the works and within the works. ...read more.

As well, Like Plato, Aristotle supposed that the need for a division of labor is the initial occasion of the formation of a society, whose structure will be modeled upon that of the family. But Aristotle (preferring the mean) declined to agree with Plato's notion of commonly held property and argued that some property should be held privately. Aristotle also drew a sharper distinction between morality and politics than Plato had done. Although a good citizen is a good person, on Aristotle's view, the good person can be good even independently of the society. A good citizen, however, can exist only as a part of the social structure itself, so the state is in some sense prior to the citizen. To conclude, Aristotle is one of the greatest thinkers in the Western tradition, but also one of the most difficult. The aim of Aristotle's logical treatises was to develop a universal method of reasoning by means of which it would be possible to learn everything there is to know about reality. From my perspective, one can say with little exaggeration that we live in an Aristotelian world. Wherever you see modern, Western science dominating a culture in any meaningful way, Aristotle is there in some form. His theories have helped transform our world into what it is today and will hopefully continue to do so in the mere future. ...read more.