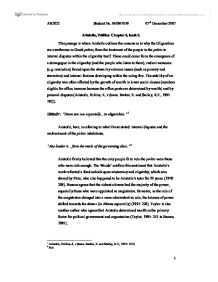 This passage is where Aristotle outlines the reasons as to why the Oligarchies are overthrown in Greek poleis; from the treatment of the people in the poleis to internal disputes within the oligarchy itself. These could occur from the emergence of a demagogue in the oligarchy (and the people who listen to them), radical measures (e.g. revolution) forced upon the demos by extreme issues (such as poverty and starvation) and internal factions developing within the ruling few. The stability of an oligarchy was often affected by the growth of wealth in lower social classes (numbers eligible for office increase because the office posts are determined by wealth) and by personal disputes (Aristotle, Politics, 6, v (trans. Barker, E. and Stalley, R.F., 1995: 192)).

Aristotle, here, is referring to what I have stated: internal disputes and the maltreatment of the poleis inhabitants.

“Any leader is…from the ranks of the governing class.”[2]

Aristotle firmly believed that the only people fit to rule the poleis were those who were rich enough. The Woods’ confirm this sentiment that Aristotle’s work reflected a fond outlook upon aristocracy and oligarchy, which was shared by Plato, who also happened to be Aristotle’s tutor for 20 years. (1978: 209). Hansen agrees that the richest citizens had the majority of the power, especially those who were appointed as magistrates. However, as the role of the magistrates changed into a more administrative role, the balance of power shifted towards the demos (in Athens especially) (1991: 228). Taylor is also another author who agrees that Aristotle determined wealth as the primary factor for political government and organisation (Taylor, 1995: 253 in Barnes, 1995).

Naxos is an island in the middle of the Aegean Sea. Lygdamis gained control of Naxos after helping Peisistratus (605 – 527BC) become tyrant of Athens.

“Sometimes an oligarchy…excluded from office”[4]

In an election (oligarchic), posts were assigned to individuals (Hansen, 1991: 237), which would have fuelled conflict because of ambitious, wealthy men who were not assigned posts and wanted more (E. Wood and N. Wood, 1978: 241).

Present day Marseille; founded in 600BC by Greeks from Phocaea. Major trading port in the Mediterranean.

Greek colony situated on the Black Sea coast (in modern day Romania). Established by Milesian settlers to trade with Getae. Thought to have been founded anywhere between 657 – 630 BC.

Part of the Sporades (islands); situated between Naxos and Ios. It is now called Raklia. It also housed temples to Tyche and Zeus Lophites.

Here we can see the squabbles between the wealthy few leading to a change in government. For example, aristocracy to oligarchy.

“…oligarchy at Istros…becoming a democracy”[9]

This is the same as above where the system of government changes.

This is the same as above where the system of government changes. The oligarchy membership was increased (reducing the power of the oligarchy).

Located in Turkey (Asia Minor). It contained a temple to Aphrodite.

Here we see that the instability of the oligarchy actually led to a complete change of government; becoming a democracy.

Asia Minor – located opposite the island of Chios.

Here is another example of regime change. Although a well executed oligarchy (could this be a aristocracy containing a virtuous few?), the people acted on injustice. The common people determined the character of government (Hansen, 1991: 68), and because they outnumbered the few oligarchs fairly easily (Ober, 1999: 310).

Demagogue – someone of power who panders to other people’s needs to make themselves popular and powerful when those peoples’ needs are not necessarily what’s needed (e.g. Hitler).

Ancient Athenian politician, son of Apollodorus. Notable for being one of the “Thirty Tyrants”.

Athenian general during Peloponnesian war. Leading role in oligarchy of the 400 in 411BC. Assassinated that year.

An example of demagogues who played upon fear of people and of those willing to take up arms (the ‘mob’).

Located in Asia Minor – found in Mysia region of the Hellespont. First mentioned in Iliad. Colonised by Milesians circa. 700BC, occupied by Persians in 514BC. Xerxes built famous bridge here in 480BC. Became member of Delian league, revolted in 411BC and allied to Sparta till 394BC.

“those who seek…aid of other people”[23]

Citizen body calls for support from other city states to restore order.

Aristotle was very scornful of those ‘few’ who were not virtuous and lived in excess (the ‘nouveau riche’ especially) (Ober, 1999: 316).

“The Elder” – Tyrant of Syracuse; conquered cities in Sicily and was regarded as the worst kind of despot/tyrant.

Sicily – founded in 734BC by Corinthian/Tenean settlers

Present day Eastern Macedonia – founded in 437BC. Colonised twice by Athens after 10,000 colonists were massacred by Thracians.

Modern day Bulgaria – settlement dates back to Bronze Age. Its name was changed to Apollonia after a temple to Apollo was built there.

Thessaly, central Greece – Battled against Athens in Persian wars and scene of major battles to come.

“Sometimes… they steal the public funds…”[34]

Aristotle tells us about how easily corruptible men are and how ‘fundamentally wicked’ they are (E. Wood and N. Wood, 1978: 215).

What Aristotle means here is how the most important governors within the oligarchy become aloof and create and oligarchy within an oligarchy (E. Wood and N. Wood, 1978: 240).

The actions of the ‘Thirty at Athens” and the “Four Hundred were similar to this in seeking foreign support to uphold their regime.

In effect, the person who has control of the army has the power – thus becoming a Tyrant.

Major city state located on the Isthmus between Athens and the Peloponnese peninsula – Major trade centre.

The Tyrant surrounds himself with his own advisors.

“Sometimes the fear…share in constitution”[42]

Aristotle may have thought of an oligarchy as a perverted form of aristocracy, but surely according to his writing, it was better then tyranny, another perverted form (Ober, 1999: 310 – 311)?

The clan that ruled in Larissa.

The ruler at Larissa; he belonged to the Aleuad clan.

Iphiades was the ruler at Abydos.

Marriages could not only provoke factional conflict, but also prevent it, i.e. marrying off an enemy to bring him closer/appease him.

City state on the west coast of Euboea. Allies of Athens.

It could have been possible that Oligarchs were ashamed of the oppressive nature of the regimes they resided over. If they had changed it for the better, this would have been something that Aristotle would have admired – an altruistic aim and a true example of his aristocratic ideal (E. Wood and N. Wood, 1978: 223).

This shows that an oligarchy worked on the basis that the richest (those who owned the largest properties) held the offices (Taylor, 1995: 247 in Barnes, 1995).

This is not often referred to by Ancient authors. Aristotle only mentions it because he ‘sees’ it as the good between two extremes (rich and poor) (Hansen, 1991: 115).

Maybe these forms of government are turning toward tyranny or monarchy?