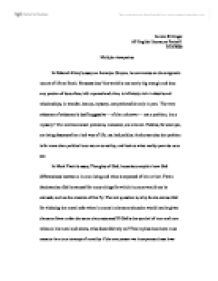 Lauren Klibingat AP English Literature Period 1 2/22/2006 Multiple viewpoints In Edward Abbey's essay on Aravaipa Canyon, he comments on the enigmatic nature of life on Earth. He states that "the world is not nearly big enough and that any portion of its surface, left unpaved and alive, is infinitely rich in details and relationships, in wonder, beauty, mystery, comprehensible only in part. The very existence of existence is itself suggestive--- of the unknown--- not a problem, but a mystery." Our environmental problems, moreover, are cultural. Politics, for example, are being destroyed by a bad way of life, not bad politics. And to see that the problem is far more than political is to return to reality, and look at what reality permits us to see. In Mark Twain's essay, Thoughts of God, he seeks to explain how God differentiates between a human being and what is expected of him or her. ...read more.

Depending on which alternative one chooses, his or her answer or choice is most certainly based on whether he or she is being moral or not. Sometimes, you a forced to make the decision that you normally would not make. This is Joan Didion's idea called "Wagon Train" morality. In her essay On Morality, she implies that morality has little to do with the concept of being good and that everyone has a different concept of morality to justify their actions and decisions, which falls under the subject of natural ethics. People who adhere themselves to a supposedly universal moral code can mislead themselves into thinking people who do not follow that code are unfaithful and are considered less human. Sontag also implies that there is no true understanding of the nature of morality or its effects in the world, and that they can be used for almost any purpose whether it is to save the world or to destroy it. ...read more.

Therefore, both Sontag and Edward want to state that the world is full of mystery and therefore it can be deceiving, because everyone is so used to believing everything one sees. And since we've invented a new society, and new ways of looking at society and nature, it's essential upon us that we also invent new ways of understanding our experience of life and society. Henry James, on the other hand, wrote The Turn of the Screw in such an ambiguous manner that it is open to many different interpretations. However, it appears that no single interpretation has the ability to cover every aspect of the story and explain it in a way that is convincing to all. To see that the problem is far more than political is to return to reality, and look at what reality permits us to see. The primary distinction between humans and the rest of the natural world is our sense of consciousness and self-consciousness. ...read more.