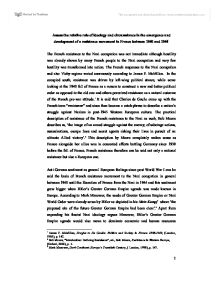 Assess the relative role of ideology and circumstance in the emergence and development of a resistance movement in France between 1940 and 1944 The French resistance to the Nazi occupation was not immediate although hostility was already shown by many French people to the Nazi occupation and very few hostility was transformed into action. The French responses to the Nazi occupation and also Vichy regime varied enormously according to James F. McMillan. In the occupied south, resistance was driven by left-wing political stance, while some looking at the 1940 fall of France as a reason to construct a new and better political order as opposed to the old one and others perceived resistance as a natural outcome of the French pre-war attitude.1 It is said that Charles de Gaulle came up with the French term "resistance" and since then became a catch-phrase to describe a nation's struggle against Nazism in post-1945 Western European culture. The practical description of resistance of the French resistance to the Nazi as such, Bob Moore describes as, 'the image of an armed struggle against the enemy; of sabotage actions, assassinations, escape lines and secret agents risking their lives in pursuit of an ultimate Allied victory'.2 This description by Moore completely makes sense as France alongside her allies was in concerted efforts battling Germany since 1939 before the fall of France. French resistance therefore can be said not only a national resistance but also a European one. Anti-German sentiment as general European feelings since post World War I can be said the basis of French resistance movement to the Nazi occupation in general between 1940 until the liberation of France from the Nazi in 1944 and this sentiment grew bigger when Hitler's Greater German Empire agenda was made known in Europe. According to Mark Mazower, the seeds of Greater German Empire or Nazi World Order were already sown by Hitler as depicted in his Mein Kampf where 'the proposed site of the future Greater German Empire had been clear'.3 ...read more.

Why the Communists had to be the "scapegoat" for the Maquis resistance as argued by Atkin? It cannot be argued if the Maquis had some political agenda on their minds for citing resistance to the Nazi on the Communists but a valid question can be asked is, why the Communists? Why not the army for instance? It has been mentioned earlier that the Communists were suspected from the beginning of their establishment and many historians argue that their involvement represented by the Parti Communiste Fran?ais (PCF) in their resistance to the occupation remains a controversial one. The PCF on the other hand was already facing internal and external crisis ranging from the attack on workers' right and campaign against the communist party in France as well as facing the Munich dilemma and the increasing threat of the Nazi Germany. The non-agression pact signed between the Nazi and the Soviet Union ended once and for all the French popular front.31 The full form of the Communists resistance took place after Hitler's invasion of Soviet Union, however this is opposed by the Communists who insisted that their anti-Nazi sentiment had already existed before the invasion and distinguished themselves from that of the German Nazis. The Communists resistance is argued to be only active in their resistance activity after 1941. Their struggles were directed at both Nazi as well as the Vichy. Aggressive policy of combating communist subversion since before the occupation by the Third Republic and after the occupation by both the Nazi and the Vichy and persecution of the PCF members said to be one of the factors that provoked the communists to embark on aggressive resistance struggles as argued by communist inclined historians. Julian Jackson however argues, that the seeds of communist resistance was made clear but merely on the surface that the Communist resistance took place only after they had received a directive from Moscow to organize 'the resistance of the masses against the agressor'.32 This directive from Moscow instructed the French communists ...read more.

This was demonstrated by the swelling number of the Maquisards when those evading the STO joined their resistance movement. The evasion of the STO by the French people was not only caused by the strong anti-Nazi sentiments and deportation to Germany but also due to the brutal treatment of the Nazi towards their forced labours and the persecution of the Jews in Germany. The Jews in France were ultimately affected by the fate of their brethrens under the Nazi in Germany, thus, led them to resist the occupation and their resistance dramatically changed the urban character of the Jews in France. Other resistance movement emerged as a result of the Nazi's brutal treatment of the Jews and the daily ordeal living under the Nazi occupation was the Catholic resistance and historians argue that the Catholic resistance was also motivated by the long history of enmity between Catholicism and Protestantism. Germany's track record of her Catholic-Protestant history herself can hardly be regarded as excellent. In this sense the Catholic resistance was also directed at the Protestant Vichy government. Shortage of food and other basic needs are part of the ordeal endured by the French people under the Nazi, and this greatly challenged the French women's maternal roles, hence, provoked them to resist the occupation. The women resistance to the occupation and the danger they faced were not any less important than that of their male counterparts. Intellectual resistance can be deemed as the backbone of the French resistance movement to the occupation. Through their intellectual works the spread of resistance ideas and message reached the people resulting in the growing number of members of the resistance and motivation in the resistance activities. French intellectuals through their works provide sense of direction and purpose for the resistance movement. Problem such as division and distrust as in the case of the Communist resistance vis-�-vis the general French people and other resistance movement however served as obstacles toward a more united and fruitful efforts in the resistance struggles, hence, hampered the speedy liberation of France. ...read more.