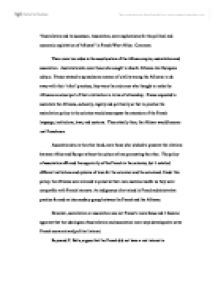 &quot;Assimilation and its successor, Association, were euphemisms for the political and economic exploitation of Africans in French West Africa.&quot; Comment.

"Assimilation and its successor, Association, were euphemisms for the political and economic exploitation of Africans" in French West Africa. Comment. There were two sides to the acculturation of the African empire, assimilation and association. Assimilationists were those who sought to absorb Africans into European culture. France wanted to spread some manner of civility among the Africans: to do away with their 'tribal' practices, they were the only ones who thought to make the Africans an actual part of their civilization in terms of citizenship. France expected to assimilate the Africans, culturally, legally and politically so that in practice the assimilation policy in the colonies would encompass the extension of the French language, institutions, laws, and customs. Theoretically then, the African would become real Frenchmen. Associationists on the other hand, were those who wished to preserve the relations between Africa and Europe without the culture of one permeating the other. The policy of association affirmed the superiority of the French in the colonies, but it entailed different institutions and systems of laws for the colonizer and the colonized. Under this policy, the Africans were allowed to preserve their own customs insofar as they were compatible with French interests. An indigenous elite trained in French administrative practice formed an intermediary group between the French and the Africans. However, assimilation or association was not France's main focus and it became apparent that the ideologies of assimilation and association were ways developed to serve French economic and political interest. ...read more.

A series of additional decrees in 1904 defined the structure of this political unit and organized it into French West Africa (Afrique Occidentale Fran�aise - AOF). France divided the individual colonies into districts known as cercles, each of which was governed by a district commander (commandant du cercle) who, because of poor communications between the cercles and the colonial governors, exercised his responsibilities with relative autonomy. Within a cercle, the commander ruled through a hierarchy of local rulers, whom he appointed and could dismiss at will. He was advised by a council of notables (conseil des notables) consisting of these local rulers and of other individuals appointed by him. The French thinker Albert Sarraut expounded on how education should further the French idea of mise en valeur - the exploitation of African human resources. He believed that the education of the natives was their duty but that it coincided with their obvious economic and political interest. Education serves to increase in the mass of native workers the quality of intelligence and the variety of skills. Additionally, picking out and training from among the labouring masses, elites of collaborators, (technical assistants, foremen, employees, clerks etc.) who will make up for the numerical insufficiency of Europeans and satisfy the growing demands of colonial agricultural, industrial and commercial enterprises. This required a change in African culture, which could only be brought about by education. ...read more.

This source of labor was so important to the economic life of C�te d'Ivoire that in 1932 the AOF annexed a large part of Upper Volta to C�te d'Ivoire and administered it as a single colony. In addition to the political and economic changes produced by colonial rule, the French also introduced social institutions that brought about fundamental changes to Ivoirian culture. Catholic missionaries established a network of churches and primary schools, which in time provided the literate Ivoirians needed by government and commerce. Some of the wealthier and more ambitious Ivoirians continued their educations at the few secondary schools and at French universities, adopting European culture and values and becoming members of a new African elite. The members of this elite were accepted as cultural and social equals by their white counterparts and were exempt from military and labor service. Except in remote rural areas, the colonial government gradually destroyed the traditional elite by reducing the local rulers to junior civil servants and by indiscriminately appointing as rulers people with no legitimate claims to such titles. In areas where traditional leaders retained their position and power, they often developed strong rivalries with educated Ivoirians who tried to usurp that leadership on the grounds that their education and modern outlook better suited them for the position. ...read more.