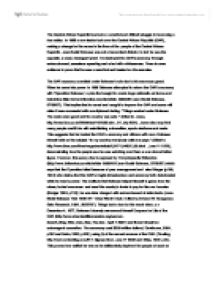 The Central African Republic has had an eventful and difficult struggle in becoming a free nation. In 1966 a new leader took over the Central African Republic (CAR), making a change for the worse in the lives of the people of the Central African Republic. Jean-Bedel Bokassa was not a benevolent dictator; in fact he was the opposite, a cruel, deranged tyrant. He destroyed the CAR's economy through embezzlement, senseless spending and ruled with ruthlessness. There is even evidence to prove that he was a cannibal and feasted on his enemies. The CAR economy crumbled under Bokassa's rule due to his enormous greed. When he came into power in 1966 Bokassa attempted to reform the CAR's economy with 'Operation Bokassa', a plan that sought to create huge nationalised farms and industries (http://www.britannica.com/eb/article-9080461/Jean-Bedel-Bokassa, 07/28/07). This implies that he cared and sought to improve the CAR and some will claim it was successful with one diplomat stating: "Things worked under Bokassa. The roads were good and the country was safe." (Cited in: Jones, http://news.bbc.co.uk/2/hi/africa/1454359.stm, 24 July 2001). Jones also says that many people credit him with establishing universities, sports stadiums and roads. This suggests that he treated the CAR's economy and citizens with care. Bokassa himself said on the subject: "In my country everybody calls me papa." (Cited in: http://www.time.com/time/magazine/article/0,9171,946313,00.html, June 11 1979), demonstrating how the people saw he was watching over them as an almost father figure. However, this sunny view is opposed by Encyclopaedia Britannica (http://www.britannica.com/eb/article-9080461/Jean-Bedel-Bokassa, 07/28/07) ...read more.

Another story told by a university professor states that Bokassa, "used to scoop up beggars in his plane and drop them into the Bangui river." (Cited in: Jones, http://news.bbc.co.uk/2/hi/africa/1454359.stm, 24 July 2001). The professor's story demonstrates how Bokassa saw people as dispensable; anyone causing a nuisance was removed. Criminals were punished harshly with Bokassa's 'three strikes and your out' regime. On first crime, an ear would be cut off, second, the other ear and third, a hand (Cawthorne, 2004, p182); they would also be beaten and tortured. This is corroborated by Appendix 1 which shows thieves with their ears cut off, and Appendix 2 which shows thieves being beaten. Thieves were also used as food for the crocodiles and lions in Bokassa's private zoo (Echoes from a Sombre Empire (Documentary), 1990). One year he celebrated mother's day by hanging all those arrested for crimes against women (Jean-B�del Bokassa Trial: 1986-87." Great World Trials. Edited by Edward W. Knappman. Gale Research, 1994.). This shows how Bokassa did not value the lives of others. There were also many innocent victims, including Marie-Rene Hassen, a woman who was forced into marrying Bokassa. When she refused his advances Marie and her family were sent to prison for two years until he came to her. She says he became a, "terrifying myth." And that one day she understood stating, "I had to give in if I wanted to be free." ...read more.

The ambassador also remembers how Bokassa would comment at dinner parties that he, "sometimes wondered whether his ambassadorial guests realized exactly what they were eating." (Dale, http://www.unc.edu/depts/diplomat/archives_roll/2001_07-09/dale_cannibals/dale_cannibals.html, 26/07/07). Another source supports the ambassador and describes how Bokassa would order a minister killed then feed him to the other members of the cabinet and would only tell the guests after dinner (http://www.vor.ru/English/Footprints/excl_next882_eng.html, 2002). This evidence hints at but does not prove that Bokassa did indeed eat his citizens. But the solid evidence comes from Philippe Lengis, Bokassa's ex Chef who testified at Bokassa's trial that he did cook human flesh at Bokassa's demand (http://www.vor.ru/English/Footprints/excl_next882_eng.html, 2002). At the trial he was not convicted of cannibalism as President Andre Kolingba had declared amnesty for all misdemeanours committed during tenure of his predecessors (Jean-B�del Bokassa Trial: 1986-87." Great World Trials. Edited by Edward W. Knappman. Gale Research, 1994. Reproduced in History Resource Center. Farmington Hills, MI: Gale Group) and he could therefore, not be charged. However; just because he was not charged of this crime does not mean he did not commit it, the evidence suggests that Bokassa was truly a cannibal and a virtual monster as well. In conclusion Bokassa destroyed the Central African Republic throughout his rule with his greed and insane behaviour, he devastated his citizen's lives with persistent violence, and he even ate his political enemies. Jean- Bedel Bokassa was not a benevolent dictator; he was the opposite, a cruel, malicious tyrant. Certainly without his self-indulgent rule the CAR would have been a far happier, safer and even wealthier country. ...read more.