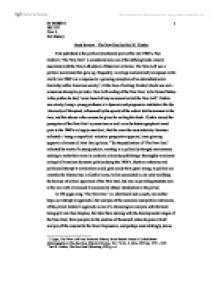 Book Review - The New Deal by Paul K. Conkin First published in the politically turbulent years of the late 1960's, Paul Conkin's 'The New Deal' is considered now one of the defining books closely associated with the New Left school of historical criticism. The New Left was a political movement that grew up, frequently, in college and university campuses in the mid to late 1960's as a response to a growing perception of an entrenched social hierarchy within American society.1 At the time of writing, Conkin's book was not a conscious attempt to provide a New Left reading of the New Deal, as he himself states in the preface he had, 'never heard of any movement called the New Left'. Conkin was clearly, being a young professor at a dynamic and progressive institution like the University of Maryland, influenced by the spread of the radical disillusionment at the time, and this shows in the reasons he gives for writing this book. Conkin viewed the perception of the New Deal in journalism as well as in the historiographical trend prior to the 1960's as largely uncritical, that the even the most scholarly literature reflected a 'smug or superficial valuative perspective-approval, even glowing approval of almost all New Deal policies.'2 So the publication of 'The New Deal' reflected the work of a young scholar, working in a politically charged environment, seeking to make their name in academic circles by publishing a thoroughly revisionist critique of American domestic politics during the 1930's. ...read more.

In one particularly notable sentence, Conkin says of Roosevelt 'he stimulated righteous indignation and the atmosphere of a moral crusade. But the crusade could do little except take punitive action: divide a holding company, threaten but never collect progressive taxes or use welfare measures to uplift the downtrodden victims of evil.'6 In this chapter, Conkin expertly sums up the paradox of both sides of the New Deal, those criticising it for taking the American government down a dangerous socially interventionist route and those New Deal apologists that he reserves so much distrust for. The paradox lies in the efficacy of the reforms that Roosevelt introduced, and the way that, despite being painted by many opponents of the New Deal as the slippery slope to socialism, were actually, in terms of alleviating the human cost of the depression, rather ineffectual. Conkin's conception of just what constitutes a Welfare State is interesting. He does view the period as the formative one of the American Welfare State, of course cross-Atlantic conceptions of exactly what constitutes a Welfare State are somewhat disparate but Conkin is right in suggesting that, especially given what had preceded it, the 1930's did see the formation of the American Welfare State, in the limited capacity that it exists in the wider definition. Unlike old leftist historians, Conkin does not really see the New Deal in terms of a class conflict; his analysis is more sophisticated than that. In fact the whole area of labour relations, previously of utmost importance to old leftists, plays consistent second fiddle throughout the book to Conkin's primary concern, the implications on social welfare in general. ...read more.

Every issue in the book is related back to Roosevelt's personality, despite, in analysing the pragmatic theory, attributing the influence of the pragmatism of the New Deal to the large numbers of pragmatists who envisioned the sweeping changes than Roosevelt was comfortable with.12 As an example of New Left literature, 'The New Deal' must be seen in the context of the movement that it was a part of, whether unconsciously or not. The New Left movement in historiography mirrored the wider political movement, with a focus on protesting 'r****m, imperialism, liberalism, the power elite, bureaucratic centralization, and the very nature of corporate capitalism. The New Left marked a departure from the old focus on labour movements and relations and Conkin personified this new wider, social approach to left wing history. 'The New Deal' is, despite its flaws, a worthwhile book. It reveals almost as much about the period in which it was written and the attitudes that pervaded American historiography in the 1960's, as it does about the 1930's. The conclusion of the book, is however a little disappointing. In having gone to such great lengths to spell out the New Deal's inherent failures of both methodology and results, Conkin's inability to suggest any plausible alternatives to the New Deal leaves the reader with the impression that the New Deal really was just an attempt to try and rectify a truly catastrophic situation without regard to the historical criticism and revisionism of the future. As Roosevelt himself said of his intentions, 'if one method fails, admit it frankly and try another.'13 In Conkin's eagerness to lambast Roosevelt's actions and inactions, he sometimes falls into the revisionist trap of excessive retrospective analysis. ...read more.