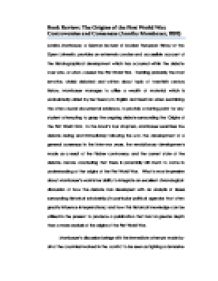 Book Review: The Origins of the First World War: Controversies and Consensus (Annika Mombauer, 2002) Annika Mombauer, a German lecturer of Modern European History at the Open University, provides an extremely concise and accessible account of the historiographical development which has occurred within the debate over who, or what, caused the First World War. Tackling probably the most emotive, widely debated and written about topic of twentieth century history, Mombauer manages to utilise a wealth of material, which is undoubtedly aided by her fluency in English and German when examining the often crucial documental evidence, to provide a starting point for any student attempting to grasp the ongoing debate surrounding the Origins of the First World War. In the book's four chapters, Mombauer examines the debate during and immediately following the war, the development of a general consensus in the inter-war years, the revolutionary developments made as a result of the Fischer controversy, and the current state of the debate, before concluding that there is potentially still much to come in understanding of the origins of the First World War. What is most impressive about Mombauer's work is her ability to integrate an excellent chronological discussion of how the debate has developed with an analysis of issues surrounding historical scholarship (in particular political agendas that often greatly influence interpretations) ...read more.

Germany's post-Second World War belief that they desperately needed to prove their innocence due to fears of their future position in Europe was misguided, as the fight against Communism ensured that the rest of Europe would happily overlook such issues in their quest to repel the Communist threat. Observing issues such as this, and equally why it was so important during and following the war to prove one's innocence, can easily lead to a criticism of poor historical integrity on behalf of those who willingly endorsed it at the time. The First World War is now a genuine event in history, whereas throughout the debate it had played a pivotal role in the lives of those discussing it and still played an important diplomatic role within many of the countries concerned. As well as observing these tendencies in the past, Mombauer makes the excellent point in her conclusion that history is not an objective, factual account of events as they occurred, and historical accounts have to be read with a clear understanding of their provenance, and so it is therefore unlikely that anybody will be able to produce an entirely accurate account of what really brought about the First World War. This idea that completely objectivity is not only relevant to those offering new interpretations, but also those providing a historiographical overview of a debate, and Mombauer herself demonstrates this in the chapter regarding Fischer. ...read more.

Perhaps the most challenging aspect of this issue is that there is ample evidence to support any desired argument as to who was to blame, and it has even been possible for vastly different interpretations to be generated from the same pieces of evidence. Mombauer manages to effectively synthesise these arguments into a concise and accessible publication that should prove to be a key resource for any student attempting to tackle such a broad topic. Although at first it is difficult to understand the interest for the general reader in such a book, Mombauer's method of tackling the Fischer controversy ensures that anybody with an interest in this area of history would garner interest from the diversity and comprehensiveness of the views and sources examined. As much as Mombauer's sometimes forceful pushing of Fischer's ideas would occasionally seem inappropriate in a book purely examining the development of the debate, it her utilisation of a her own wealth of knowledge, insightful raising of important questions about why the debate has relevance even to this day and discussion of broader historical issues that transform the book into more than just a historiography of the origins of the First World War. Mombauer's expertise in this field is evident throughout the book and she has unquestionably gone a long way to providing an excellent overview of a notoriously challenging topic. ...read more.