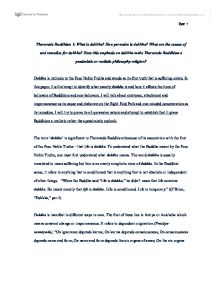 Buddhism: The Concept of Dukkha

Theravada Buddhism 1: What is dukkha? How pervasive is dukkha? What are the causes of and remedies for dukkha? Does this emphasis on dukkha make Theravada Buddhism a pessimistic or realistic philosophy-religion? Dukkha is intrinsic to the Four Noble Truths and stands as its first truth that is suffering exists. In this paper, I will attempt to identify what exactly dukkha is and how it affects the lives of believers of Buddhism and non-believers. I will talk about existence, attachment and impermanence as its cause and elaborate on the Eight Fold Path and one-minded concentration as its remedies. I will try to prove its all-pervasive nature and attempt to establish that it gives Buddhism a realistic rather than pessimistic outlook. The term 'dukkha' is significant to Theravada Buddhism because of its association with the first of the Four Noble Truths - that life is dukkha. To understand what the Buddha meant by the Four Noble Truths, one must first understand what dukkha means. The word dukkha is usually translated to mean suffering but this is an overly simplistic view of dukkha. In the Buddhist sense, it refers to anything that is conditioned that is anything that is not absolute or independent of other things. "When the Buddha said "life is dukkha," he didn't mean that life contains dukkha. ...read more.

Third, it is maintained that all transient beings, whether gods, humans, pretas (deceased), animals, or inhabitant of hell, are subject to dukkha. Therefore, it is evident that dukkha is all- pervasive and all-encompassing. "Buddhism does asset the universal nature of suffering...Gods suffer the least since they are in a hierarchy of different beings, and the inhabitants of hell the most. Humans lying midway experience a mixture of suffering and happiness; this makes them best fitted to escape from their temporary surroundings, because the mixture gives them both the opportunity and the impetus to discriminate the nature of reality." (Bowker 297) Dukkha asserts that suffering is human life and thus its main cause is existence itself. Unlike Western religions that assert that suffering is either the will of God, or an inheritance of original sin, Buddhism places suffering squarely at the bearers doorstep, either by past bad karmic actions, the discomfort we cause ourselves by searching for inherently unfulfilling paths, or by the simple fact that by inhabiting a human form we are subject to the deterioration of all physical matter. Aging, growing, living, and dying are all facts that even the most enlightened cannot transcend. The concepts of attachment and impermanence are also causal factors of suffering. ...read more.

The doctrine of no-self and change help understand the realistic aspect of Theravada Buddhism. It is a universally accepted fact that change is inevitable and that with change come suffering from severing ties and cutting attachments. This view is neither simplistic nor pessimistic because it considers the existence of suffering from a non-religious perspective. It also establishes the fact that change brings with it the possibility for everything to become new again. Acceptance of suffering also makes peace of mind and freedom easier to access. It also brings one, one step closer to attaining nirvana and thus, escaping the material world and suffering forever. Thus, it is futile to look at Theravada Buddhism through the narrow scope of pessimism but very advantageous to look at it through the broad scope of realism. "The doctrine of "no-self" helps us understand why the doctrine of suffering is not as pessimistic as it seems. From a Buddhist point of view, it is simply realistic to accept that the human personality and all of reality is constantly changing and that the cause of suffering is not the change itself, but the human desire to hold on to things and keep them from changing. Buddhists...understand that if everything changes, then it is possible for everything to become new. If they accept the doctrine of suffering, it is possible to approach even the most difficult situations in life with a feeling of lightness and freedom. ...read more.