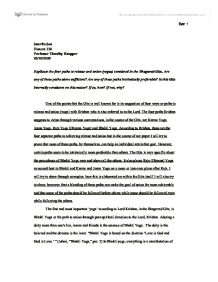 Sunrita Sen Honors 118 Professor Timothy Knepper 03/10/2009 Explicate the four paths to release and union (yogas) contained in the Bhagavad-Gita. Are any of these paths alone sufficient? Are any of these paths intrinsically preferable? Is this Gita internally consistent on this matter? If so, how? If not, why? One of the points that the Gita is well known for is its suggestion of four ways or paths to release and union (yoga) with Krishna who is also referred to as the Lord. The four paths Krishna suggests to Arjun through various conversations, in the course of the Gita, are Karma Yoga, Jnana Yoga, Raja Yoga (Dhyana Yoga) and Bhakti Yoga. According to Krishna, these are the four separate paths to achieving release and union but in the course of my paper I will try to prove that none of these paths, by themselves, can help an individual attain that goal. However, certain paths seem to be intrinsically more preferable than others. The Gita is very specific about the precedence of Bhakti Yoga over and above all the others. It also places Raja (Dhyana) Yoga as second best to Bhakti and Karma and Jnana Yoga on a more or less even plane after Raja. I will try to show through examples, how this is elaborated on within the Gita itself. I will also try to show, however, that a blending of these paths can make the goal of union far more achievable and that some of the paths should be followed before others while some should be followed even while following the others. The first and most important 'yoga' according to Lord Krishna, in the Bhagavad Gita, is Bhakti Yoga or the path to union through pure spiritual devotion to the Lord, Krishna. ...read more.

(Bhave, 21) The fourth and final yoga prescribed by Krishna is Jyana Yoga or the achievement of liberation and union through supreme knowledge. The literal meaning of the Sanskrit word 'jnana' is knowledge but Jnana yoga does not refer to knowledge in the simple sense of the word but knowledge as knowing Krishna as the ultimate from whom Brahman emerged and knowing that Brahman and the Self are one and the same. "To say, 'I am Brahman, the pure, all-pervading Consciousness, the non-enjoyer, non-doer and silent witness,' is Jnana. To behold the one Self everywhere is Jnana." (Swami Sivananda, "Jnana Yoga", Par. 1) Jnana yoga is often referred to as spiritual wisdom. "Jnana yoga is the way of knowledge or in the words of the text, spiritual 'wisdom'. Precise exposition of this yoga is not undertaken in the text." (Baird and Heimbeck, 144) Krishna does not go into very much detail about this particular yoga in the text of the Gita which projects the idea that Krishna does not believe that this yoga is able to achieve the goals of union and liberation as quickly and successfully as the other yogas. He often discusses the context of the other yogas but deliberately evades Jnana as a plausible route to the goal. It is evident however, that this is not the simplest path to union for it goes beyond following a prescribed path and dedicating oneself to intellectual study. Jnana refers to knowledge but the emphasis is not on acquiring information but on developing the analytical powers of the mind. There are in fact seven stages to Jnana yoga or seven Jnana Bhumikas. "First, Jnana should be developed through a deep study of Atma Jnana Sastras and association with the wise and the performance of virtuous actions without any expectation of fruits. ...read more.

yoga. Meditation has the intrinsic properties of one-pointedness and a controlled mind, both of which have been accepted as important elements of an enlightened mind since the Vedas. This unified mind takes away duality and those who are established in the path of meditation do not differentiate one thing from the other. "Those who possess this wisdom have equal regard for all...Such people have mastered life. With even mind they rest in Brahman, who is perfect and is everywhere the same...With mind established in Brahman, they are free from delusion...With consciousness unified through meditation, they live in abiding joy." (Baird and Heimbeck, 161) This yoga has been the preferred path to release since the Upanishadic times and continues to be of vital importance even in the Orthodox period. The second yoga that seems to have some intrinsic properties that makes it preferable to others, is the Karma yoga. This yoga, though radically opposite to Upanishadic views has the distinct property of action as opposed to inaction. It is a simple path that simply calls for the renouncement of attachment to selfish desires and to the outcome of actions. "Both renunciation of action and the selfless performance of action lead to the supreme goal. But the path of action is better than renunciation." (Baird and Heimbeck, 160) This property makes it far more accessible to the common folk than the other yogas. In this sense, Karma yoga would most definitely, appear to be the preferred path of the masses. "As long as one has a body, one cannot renounce action altogether." (Baird and Heimbeck, 184) The Gita hints that certain yogas have intrinsic properties that make them superior but does not clearly state that one is superior to the other merely because of its intrinsic properties. Krishna spends a great deal of time, however, explicating the two yogas discussed in the previous paragraph. ...read more.