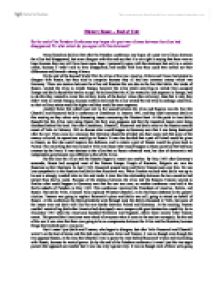 By the end of the Potsdam Conference any hopes of a post-war alliance between the allies had disappeared. To what extent do you agree with this statement?

It was obvious to the allies that as Russia advanced west, her idea of democratic and independent governments was different to that of the Allies. By this time the Allies and the Russian began to resent one another. By May 1945 after Germany's surrender, Russia had occupied most of the Eastern Europe. People of Rumania, Bulgaria etc. saw the Russians as their liberators. In April 1945, Roosevelt passed away and Harry Truman took over him. He was less sympathetic to the Russians and Stalin than Roosevelt was. When Truman realised what Stalin was up to he sent a strongly worded letter to him and made it clear that the relationship between the two countries had turned from bad to worst. Because of the distance between the allies and the Russian Truman wanted to finalise what would happen to Germany now that the war was over, so another conference was held at the Berlin suburb of Potsdam in May 1945. This conference involved the Presidents of America, Britain, and Russia. But unlike Yalta, Clement Atlee replaced Winston Churchill, as he had been defeated in the general election. ...read more.

So in conclusion I wouldn't completely agree with the statement above because if they were able to form an alliance before the conference and were able to defeat Germany as I team, I think that if they had time to sort out their differences then they would have been able to form a strong post-war alliance. But I also believe that if they didn't trust each other from the beginning then they would have to work at it, because without trust they wouldn't be able to help one anther, and even when they were allies before the Potsdam conference they still didn't trust each other 100% that is why Britain was willing to go behind each others back and was willing to form an alliance with Russia if they had the chance. So I agree to a certain extent that after the conference hopes of a post-war alliance had disappeared, but I think if they started from scratch and gave each other a chance then they would have been able to form a good alliance, that could have taken control over countries in the East like the Russians did. ...read more.