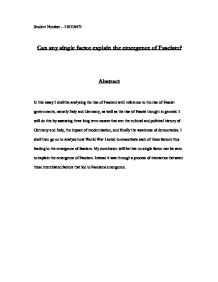 Can any single factor explain the emergence of Fascism?

This argument of the role class warfare played in the emergence of Fascism as an ideology is shown in the German election of 1933 where the majority of factory workers voted for the Social Democrats or the Communists, whilst support for Fascism came from the bourgeoisie. Whilst Horkheimer and Adorno (1968, p.21) argue Fascism is a consequence of modernity itself, citing that "the curse of irresistable progress is irresistible regression" into the immorality of fascist ideals. The rise of Fascism is better viewed as being less closely linked to modernisation and more linked as a response to the rise of Socialism. This is reinforced by Trotsky (in Mandel 1995, p.107) who saw both German and Italian fascism as a "battering ram against the organizations of the working class". This shows how along with nationalist disputes, class disputes are another key factor explaining the rise of Fascism. As Mann (2004, p.91) states along with numerous other factors "Class conflict fuelled by...capitalist crisis fuelled...fascism". It was the shattering influence that World War I had on the democracies that were linked to it and the subsequent rapid emergence of Communism in Russia and across Europe that intensified Fascist movements and so should again be seen as a key trigger in the emergence of Fascism. There is little argument amongst scholars that the state of Europe was politically socially and economically altered after World War I with hunger and unemployment widespread. ...read more.

This worsening economic situation was a product of World War I and so World War I should be seen as a short term trigger which intensified the weaknesses of the Italian and German democracies. As has been shown through a complex analysis of why Fascism emerged, there are numerous factors each of which contributed significantly to the rise of Fascism and without any one of which the Fascism that we see in Italy and Germany in the inter war years are likely not to have prevailed. Without the class conflict emerging from modernisation Fascism may not have emerged, as its function as a bourgoisie tool was central to its success. Similarly without the nationalist conflict arising from political thought and intensified by World War I Fascism may not have emerged, due to the fact its nationalistic appeal was also central to its success. Finally without the political conflict originating from the weakness of democracies Fascism may not have emerged, as its appeal as a strong and unwavering form of governance was another factor key to its success. Therefore the emergence of Fascism is a phenomenon that should be seen as being contingent on a number of factors, each of which were intensified by World War I, and without any one of these factors, it is unlikely that the European Fascism of the inter war years would have emerged in the same way. ...read more.