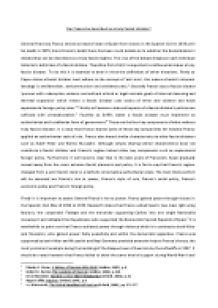 Can Franco be described as a truly fascist dictator?

Mimicry is one of Paxton's difficulties in defining a fascist.[14] This is because various other people and organisations have also mimicked Mussolini which were not functionally fascist, an example of this is Oswald Mosley and the BUF in Britain. Overall it is clear to see that Franco implemented an authoritarian form of government and adhered to the concept of 'anti isms' which are both key components of a fascist dictator as stated in the introduction. Franco also clearly mimicked elements of Mussolini's style of rule. Although this is still not enough to describe Franco as a truly fascist dictator. It is essential to assess Franco's domestic and social policies. Historian De Meneses argues that Franco cannot be a fascist as 'There is an element of revolutionary politics in fascism, of wanting to provoke a dramatic change in society. That was not Franco?s intention: on the contrary he wanted to preserve Spain from change'.[15] This is largely true. As Franco's social and domestic policies were conservative rather than revolutionary. Franco was highly motivated by religion and portrayed himself as a defender of the Catholic faith. Thus the Catholic Church heavily influenced the character of Franco?s laws. This can be seen in the Principles of the Spanish National Movement according to the Act of 1938, which states 'The Spanish nation regards it as a mark of honour to obey the law of ...read more.

For instance Franco implemented an authoritarian form of government and Francoist ideology fitted Payne's 'anti isms' concept of anti-communism, anti-democracy and anti-liberalism. However Francoism lacked too many of the other key fascist components to be considered truly fascist. Franco did not hold expansionist foreign policy aims and Spain was never on an inevitable path to war like other fascist states such as n**i Germany and Fascist Italy. It is clear that expanionism and militarism were at the heart of both Nazism and fascism, however expanionism and militarism are barely prevalent themes in Francoism. Franco also lacked ultranationalist policies. Instead it is fair to say that Franco was more motivated by religion and Catholicism influenced much of Franco's laws and policy rather than ultranationalism, which is not the characteristic of a fascist. A true fascist dictator puts ultranationalism and serving the state above anything else. In addition Francoist Spain also lacked the more extreme fascist social policies such as r****t and discriminatory laws. Franco also did not seek to revolutionary change Spanish society or to create a 'new man', instead Francoism was conservative and seeked to preserve Spanish traditions. Furthermore Francoist economics actually liberalised to an extent, over the course of Franco's reign Spain moved away from the more semi fascist extremes such as autarky and embraced more liberal economics such as a free market economy. Overall it is much more accurate to describe Francoist Spain as an authoritarian, Catholic, conservative regime rather than a truly fascist dictatorship. ...read more.