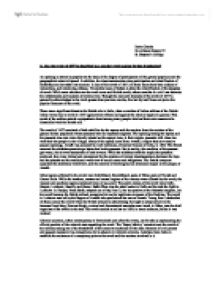 Can the revolt of 1857 be described as a popular revolt against foreign domination?

Ravie Charles B.A.(Hons) History III St. Stephen's College Q. Can the revolt of 1857 be described as a popular revolt against foreign domination? An uprising is termed as popular on the basis of the degree of participation of the general populace and the geographical extent of spread. In addition, the class/caste/section-wise participation and identification of leadership are also taken into account. In case of the revolt of 1857, all these issues have been subject of contentions, and continuing, debates. Yet another issue of debate is about the identification of the target(s) of revolt. While some scholars see the revolt as an anti-British revolt, others consider it a civil war between the collaborators and resisters of colonial rule. Though the scale and intensity of the revolt of 1857 is generally acknowledged to be much greater than previous revolts, this fact by itself does not prove the popular character of the revolt. There was a significant threat to the British rule in India, when a number of Indian soldiers of the British Indian Army rose in revolt in 1857 against their officers and against the colonial regime in general. This revolt of the soldiers struck a sympathetic chord among many people who had their own reasons to be dissatisfied with the British rule. The revolt of 1857 consisted of both rebellion by the sepoys and the reaction from the sections of the general Indian population where peasants were an important segment. ...read more.

Historians such as S B Chaudhuri considered land transfers and loss of landed rights as important motive forces that moved the peasant masses to rebel. According to this theory, moneylenders assisted the colonial state in the process of peasant dispossession. This view was proved erroneous by Eric Strokes, based on his studies of Saharanpur and Muzaffarnagar districts in UP. Strokes' study of these areas proved that the revolt was most intense in areas where moneylenders were least successful in taking over landed rights. Strokes also indicated that often the highest revenue rates were borne by cultivating proprietors without complaint, in areas of fertile soil and easily available credit. Often, Strokes writes, subdivision of tenurial rights could be a potent factor leading to a 'natural explosiveness' that manifested itself against the colonial state. Though Thomas R. Metcalf, in his study of northern India in the 19th century, also reiterated the point about the rise in enforced transfer of property under the colonial state, his analysis was more complex. For him, the ability of the taluqdar to adapt to new institutions was equally, if not more, important than the fact of dispossession itself. the point about the complexity of individual motives and the inadequacy of blanket explanations of the revolt was also made by T R Metcalf. For him, those taluqdars who could transform themselves into an 'enterprising magnate element' via enhancement of productivity and/or diversification would be likely to remain loyal to the colonial state. ...read more.

Even those who have termed the mutiny a popular revolution have stopped short of attributing a 'nationalist' motive or 'patriotic' sentiments to it. Rajat Ray, however, approaches these issues from a different perspective. Ray accepts that it is religious rhetoric that predominates in the mutineers' proclamations. However, he makes a case for reading patriotic sentiments in these proclamations, even if disguised the vocabulary of religion. The patriotism felt by those involved in the revolt is negated in secondary historiography precisely because it is expressed as a religious crusade. Ray reads the raw matter of later Indian nationalism in the mutineers' antagonism to the British. The revolt of 1857 cannot be easily compartmentalized either as solely an anti-colonial revolt or solely as a feudal reaction against local, indigenous elite. As has been discussed, the revolt was popular in some parts of the country, but restricted to one certain disaffected sections of the society. Leadership was provided both by landed magnates as well as by members of the lower castes, though the latter seems to be more the exception than the rule. Perhaps it can best be described as a movement against foreign domination that also encompassed local issued and grievances that had little to do with colonial rule. In this sense, the movement was anti-colonial and much more. Classificatory categories, though they made issues easier to comprehend, have often led to an overly simplistic understanding of complex events. An event as complex as the revolt of 1857 can, perhaps, best be understood without the imposition of such classificatory categories as 'popular' and 'anti-colonial'. ...read more.