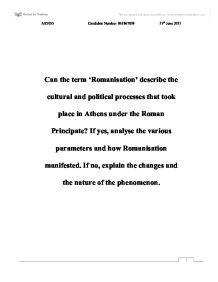 Can the term Romanisation describe the cultural and political processes that took place in Athens under the Roman Principate? If yes, analyse the various parameters and how Romanisation manifested. If no, explain the changes and

Can the term 'Romanisation' describe the cultural and political processes that took place in Athens under the Roman Principate? If yes, analyse the various parameters and how Romanisation manifested. If no, explain the changes and the nature of the phenomenon. Content: Page 2: Contents Page Page 3: Introduction Page 4: Constitutional reform Page 7: Athenian numismatics - processes and identity through the study of coins Page 9: The combination of Greek and Roman identities through Ceramics Page 12: Change in Athenian Architecture Page 14: Changes in religious worship Page 16: Other Cultural Processes: Changes in education, festivities and sports Page 18: Changes in Athenian Housing Page 19: Conclusion Page 21: Bibliography - Ancient Authors Page 22: Bibliography - Modern Authors Introduction: In Athens and Rome, we have two of the most keenly studied cities in the ancient world. In 146 BC, the Roman Republic exerted hegemony over Greece entirely, but this was only until 86 BC when Athens was crushed and sacked by Sulla during the Mithridatic wars and, in turn, Greece was annexed into the new Roman Empire in 27 BC as the province of Achaea under Augustus. The approach taken by early to mid 20th century scholars (such as Francis Haverfield) was that after the defeat and subjugation of a culture or people, a phase of 'Romanisation' began in a newly annexed provinces whereby Roman policies were adopted over native laws, and Roman 'culture' was introduced as well as the use of Latin, which would all in turn lead to the conquered people seeing themselves as Roman, hence the term. In reality, it is not this simple. In an area such as Greece, where the peoples were accepting of cultural imports (Swain 1996: 419), one can see how the connection was made. During the reign of Hadrian, Athens became the centre of the Greek speaking world at the helm of the Panhelleneion. Hadrian's benefaction of the city was typical Roman philhellenism: the empire had been influenced by those it had conquered. ...read more.

Excavations from Athens do reveal large amounts of imported wares, but not just from Rome. We find red-glossed Eastern Sigillata A plates from Syria as well as grey-ware platters from Ionia (Rotroff 1997: 105). So The early 1st century AD continues in much the same vein. Much of the ceramic evidence consists of imported pottery from the East and from Rome (Rotroff 1997: 107). Despite this, local pottery did not imitate these imports, but rather continued with the Hellenic tradition. A lekane from this period was found to have had a 1st century BC ancestor (Rotroff 1997: 107), whilst two 'Levantine' amphoriskoi were found which were known to have been made in the Hellenistic period (Rotroff 1997: 107, citing Thompson 1934: D79, fig. 78). Despite this, there are examples of differentiation, with two large but thin one handed vessels being found that were to become a common feature of later imperial Roman assemblage (Rotroff 1997: 107). Pottery from the later 1st century AD is completely different in look. Pottery found in a cistern, entitled 'Layer IIa', is almost entirely of a Roman design. The shapes of red-ware plates and bowls do not have any resemblance to wares in the traditional Hellenistic pottery (Rotroff 1997: 108). Instead, they are of a design that originated in Italy but can be found in red-ware found all over the East and West at the end of the first century AD (Rotroff 1997: 108, citing Robinson 1959: G49, G65, G68, G69, pls. 4, 5, 65, 66). There are only a few examples of Hellenic continuity; one of which is a bi-conical jug, with a history dating back to the 2nd century BC (Rotroff 1997: 108, citing Robinson 1959: G88). Unlike the Athenian lamp makers, potters were far more experimental with their pottery designs by the end of the 1st century AD; a mould-made cup (Rotroff 1997: 108-9, citing Robinson 1959: G48) ...read more.

On the other hand, they did use the silver sestertius as well as the antoniniani. The study of Athenian ceramics shows that lamp makers were very traditional and produced the same styles of lamp as they always had, whilst potters were very much more influenced by imports from the West and East. Architectural change shows yet more assimilation, with the Roman agora under Augustus' reign being built in a style not seen in either Rome or Greece. Rome then built in a classically Athenian (Greek) style, but according to Roman perceptions of scale and symmetry. The moving of temples from outside of Athens and into the city created a sort of museum and promoted a Roman view of Athenian identity. Hadrian continued this with the finishing of the Temple of Olympian Zeus but a Roman aspect is integrated into the building with the rise of the Imperial cult and the Roman propensity to assimilate themselves with certain deities. However, the Athenians were no strangers to this, as they worshipped particular aspects of certain gods and also incorporated other foreign gods into their Pantheon. We have also seen how Athens was still very committed to its cultural institutions like the ephebeia and festivals such as the Panathenaea which were both used and promoted by Rome to highlight Attic identity. Lastly, Athenian housing in both the early and late principate combined stylistic features common in both Roman and Hellenistic households. The key point is that, to Athens, identity seemed to be a rather fluid concept. We should remember that the Greeks were partial to absorbing cultural imports, which had no effect on their own cultural identity (Swain 1996: 418-9). And so, Athens welcomed Roman influences in some ways and rejected it in others (Alcock 1997: 5-6); in many cases, it even found middle ground between the two and thus the sharing of ideas, or creolisation, was an Athenian concept in itself (Alcock 1997: 4). What happened in Athens was not 'romanisation'; it was a blending of the two cultures. ...read more.