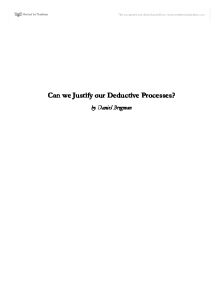 Can We Justify Our Deductive Processes? I will begin by exploring the basic problem with deduction why it seems that any attempt to justify deduction is doomed to circularity, which would seem to make the task of constructing a valid justification im

Can we Justify our Deductive Processes? by Daniel Bregman Abstract Logical deduction underpins almost all of our reasoning in philosophy and the wider world. In this essay I seek to answer the question of whether our deductive processes need justifying and, if so, how such a justification might be possible. The question has far-reaching consequences regarding the philosophical basis for most of our thought processes. I argue that a justification is impossible in the obvious sense of supporting our choice of deductive rules, but nevertheless our deductive reasoning is justified because it is made to correlate to our linguistic practice. The initial problem is that it can be shown that justifying deduction will always involve deduction, and so such a justification will inevitably be circular. In addition, any method that seems to validate a given (valid) deductive inference will also validate a given (invalid) inference. However, I then show that circularity in arguments is not necessarily a damning property, through the use of examples both from logic and from science. By looking at the role of a proposed justification (explanatory rather than suasive) it seems that a justification of the sort initially examined may still be valid in some ways. In addition, the issue of how deductive reasoning is possible at all is linked to the concept of a theory of meaning, and of how we determine the conditions for the truth of a sentence. Left with no reason to value one form of deduction above another, I then look at the possibilities that logic is empirical, conventional or pragmatic, with reference to several alternate logic systems. Having already established that any particular deductive reasoning may be justifiable in an explanatory extent, I contend that the only reason we can justify its use rather than any other logic's is that the system of deduction and our linguistic practice are simultaneously brought into line with each other. ...read more.

The idea of a gap in knowledge between the premises and conclusion is something that will be returned to later. Another example of circularity that does not necessarily make its argument defective comes from science. To test a hypothesis, an experiment must be able to give a negative result; one which contradicts the hypothesis. If an experiment is based directly on a theory, it may be unusable as support for that theory. However, there are cases in which an experiment can be devised, with equations produced under the assumption that the theory is correct, than nevertheless can produce answers that disprove the theory. In a case from contemporary physics, an experiment was carried out using Earth-based telescopes that measure the change in angle of two distant celestial objects A and B. Their relative linear velocity is calculated from the measured red shift (as objects move faster away, their colour shifts measurably towards the red end of the spectrum) using an equation, but Newtonian physics and relativity yield different formulae. Since it is currently believed that relativity is correct, the relativistic formula is used (where � is the recession velocity, S is the red shift): � = (S2 - 1)(S2 + 1) Here, as we are using the relativistic formula, � cannot be greater than or equal to 1 (the speed of light in vacuo). However, when this formula is combined with other measurements and calculations to yield a tangential velocity, there is nothing in the procedure to prevent a result greater than the speed of light - if this were to occur it would be evidence against relativity, even though the experiment was, in a way, 'circular'. The fact that a theory is assumed in producing an argument does not preclude that argument from showing the theory to be incorrect. Similarly, some ways to justify an inference that are considered circular are still open to challenging that inference. ...read more.

is amended if it yields an inference we are unwilling to accept; an inference is rejected if it violates a rule we are unwilling to amend". Our choice of logic therefore accommodates both our intuition and the formal rigour that we require of a deductive system. This solves the problem of why we use a particular system of deductive reasoning, as well as the deeper problem mentioned above of why our reasoning can correlate to facts in the real world. No one particular consideration leads the other, but rather we come to a compromise which produces a system we are happy to use. The soundness and completeness proofs show that the system will not lead us to contradictions, and the fact that the system conforms to our intuition about arguments means that we do not end up with conclusions we cannot accept. 5. Conclusion This essay began by explaining why we feel that a justification of our deductive processes is necessary; to back up our use of deductive arguments and give us confidence that such arguments are not going to lead us into false conclusions. Although it is not possible to justify that the deductive reasoning we use is in some way better than any other, it is nevertheless possible to show first that the system we use is not self-contradictory, and provide an explanation for how it works and where it comes from. I believe that this is enough to support our continued use of deductive processes. I contend that the justification of classical deduction is that it is a convention implicit in our use of language. We may ask ourselves "Would we accept a logic that disagrees with intuition?". I believe that the answer to this is no, and that any further justification than this is impossible with regards to why we use the deductive systems that we do. Analysing this topic has shown that this is not a weakness of the system we use but rather a necessary part of it. ...read more.