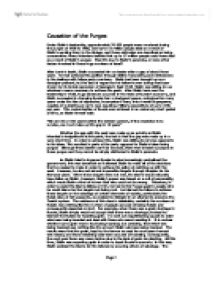 Causation of the Purges.

Causation of the Purges Under Stalin's leadership, approximately 70 000 people were murdered during the purges of 1928 to 1940, and some 12 million people died as a result of Stalin's sending them to the Gulags, and these estimates are described as being conservative. Many historians believe that up to 17 million people could have died as a result of Stalin's purges. Was this due to Stalin's paranoia, or were other factors involved in these huge numbers of dead? After Lenin's death, Stalin succeeded him as leader after a gap of about three years. He had achieved his position through skilful manovering and ruthlessness in his dealings with fellow party members. Stalin had been brought up as a Georgian peasant, but his lack of regard for his fellow human beings had been shown by his brutal repression of Georgia in Sept 1918. Stalin was willing to use whatever means necessary to achieve his goals. After Stalin took over the leadership in 1928, huge advances occurred in the state of Russia's economy, and Stalin succeeded in changing Russia from a backward power, restrained for many years under the ties of repressive, incompetent Tsars, into a world Superpower, capable of sustaining an arms race requiring military expenditure of up to 15% per year. This modernisation of Russia was achieved in an extremely short period of time, as Stalin himself said: "We are 50 or 100 years behind the western powers, if the revolution is to survive, we must make up this gap in 10 years" Whether the gap with the west was made up as quickly as Stalin intended is insignificant at this point, the fact is that the gap was made up in a very short time. In order to achieve this, Stalin was willing to remove opponents to his ideas. This resulted in parts of the party opposed to Stalin's ideas being purged. ...read more.

The purges of many ordinary people can also be attributed to the search for a scapegoat to avoid the blame falling on Stalin. Stalin's purges did achieve his aim by enabling Russia to become a world Superpower, however, there was a high cost. Many of the purges were extremely widespread and in my opinion, many of these deaths could be described as unnecessary and could be attributed to Stalin's paranoia. However, in most cases, the purges had a motive, this was either maintenance of supreme power or else finding somebody to blame for the failure to realise his targets. In this way, Stalin's paranoia was only partially to blame for the purges. His desire to maintain power and achieve near impossible targets to a greater degree led to the purges of the Russian people under Stalin. The Purges- what happened? The most prominent elements of Stalin's Purges, for most researchers, were the intensive campaigns waged within key Soviet institutions and sectors like the Communist Party, the Army, the NKVD (secret police), and scientists and engineers. In December 1934, the popular Leningrad party leader, Sergei Kirov, was assassinated, allegedly on Stalin's orders. This provided the spark for the escalating series of purges that Stalin launched almost immediately, under emergency "security" legislation "stating that in cases involving people accused of terrorist acts, investing authorities were to speed up their work, judicial authorities were not to allow appeals for clemency or other delays in which the sentence was death, and the NKVD was to execute those sentenced to death immediately." Nikolai Bukharin, Purge victim The "Old Bolshevik" elite was targeted in three key "show trials" between 1936 and 1938, in which leaders such as Lev Kamenev, Nikolai Bukharin, and Grigori Zinoviev were accused of complicity in Kirov's murder and conspiring with Trotskyite and "rightist" elements to undermine communism in the USSR. The evidence presented against the accused was almost nonexistent, convictions relying on confessions extracted through torture and threats against family members. ...read more.

and 200,000 Polish prisoners-of-war were sent to camps, where the vast majority died. When the tables turned and the Nazis invaded the Soviet Union in June 1941, Stalin pulled back, releasing many surviving prisoners to serve in the armed forces. But those hoping that the end of the Second World War, in which the USSR played the major role in defeating the Nazis and their allies, would mean a liberalization of society were sadly disillusioned. Instead, Stalin allowed his old paranoia to surface anew. Returning Soviet prisoners-of-war were sent to the labour camps as suspected "traitors," and fresh "plots" were discovered that swelled the camps' population to some 12 million people by the time Stalin finally died in March 1953. The man who emerged as Soviet leader after a brief interregnum following Stalin's death, Nikita Khrushchev, acted swiftly to dismantle much of Stalin's legacy. Most of the camp inmates were released, and after Khrushchev's "Secret Speech" denouncing Stalin at the 20th Party Congress in 1956, many of the prominent victims of the Purge were posthumously rehabilitated. But the Khrushchev "thaw" ended even before his fall from power in 1964, and the subsequent regime of Leonid Brezhnev staged a limited rehabilitation of Stalin himself. The Nobel Prize-winning writer, Alexander Solzhenitsyn, whose massive work The Gulag Archipelago (published abroad) did so much to bring the horrors of Stalinism to light, was exiled for his pains in the 1970s. Only with the rise to power of Mikhail Gorbachev in 1985 did Stalin's legacy begin to be seriously investigated and re-examined -- a process that led to a spiralling series of revelations, each more horrific than the last. With the fall of communism and the collapse of the Soviet Union in 1991, Soviet scholars like Edvard Radzinsky and Dmitri Volkogonov have published prominent expos�s of Stalinist rule, based on newly-opened archives. And the estimates of the death toll arrived at by Robert Conquest and others, long denounced as craven exaggerations, have been shown instead to be, if anything, understated. Page 1 ...read more.