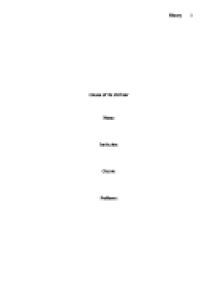 Causes of the civil war. The American civil war was a war that was fought between 1861 and 1865 in the United States of America.

Causes of the civil war Name: Institution: Course: Professor: Causes of the civil war The American civil war was a war that was fought between 1861 and 1865 in the United States of America. The war was between the southern slave states and the Northern free states. Reports show that about 620,000 soldiers were killed in the war and in addition to that, was the death of an uncertain number of civilians. Other reports claim that the number of the soldiers who died in the war ranges from 618,000 to 700,0001. From these reports, one thing is certain, the American civil war saw the death of more than 600,000 soldiers and an alarming number of citizens, thus showing the severity of the war. The American civil war was indeed a deadly war that left behind a history that can never be erased for centuries to come. There are a number of causes that led to the war. The major ones being; the election of Abraham Lincoln in the year 1960, slavery, differences between the South and the North, abolitionism, electoral fear, fight for new territories, fight for state rights, "bleeding Kansas" and slavery and control of the government. ...read more.

One may look at the issue as exploitative or perhaps manipulative on the part of the Southerners to ask for more favorable laws in regard to the slave issue and in return sacrifice a state to the Northerners, however when we think back to the economic life of the Southerners, the request then becomes clear, the Southerners wanted to secure their slaves so as to ensure continuity of their successful cotton plantations. The fight for new territories America started to expand due to the territories gained from Louisiana, and also from the Mexican war. This expansion brought about the issue of whether the states admitted would be free or slave. A rule that banned slavery from the previous Louisiana Purchase, except Missouri, was passed in 1820 under the Missouri Compromise. Conflict once again rose following the Mexican war, on what was to happen to the territories that the United States expected to gain if they emerged victorious in the war10. In response to this, David Wilmot came up with the Wilmot Proviso in the year 1846, which was to ban slavery in the new territories. This issue was not taken well and in 1850, Henry Clay created the Compromise of 1850, which was to help deal with the balance between the free and the slave states. ...read more.

After North Carolina seceded, six southern states left the union namely; Louisiana, Texas, Georgia, Alabama, Mississippi and Florida20. Soon after Lincoln won the election and following this secession, the dreadful four year war known as the American civil war began in 1861. Conclusion The American civil war is perhaps one of the most outstanding features of the American history. A lot of what is happening today can be traced back to this war. There are a number of causes that lead to the war. This paper has attempted to highlight some of the major causes of the war, but it is possible that there are some other causes of the war that were perhaps never documented. However one thing that stands out from all the causes discussed is the fact that the major backbone of the whole war was the issue of slavery. The southerners were in support of slavery due to the need for cheap labor to work in their cotton plantations, while the Northerners were against slave trade claiming that it is evil and morally wrong. A lot of factors came into play surrounding the issue of slavery between the states, but the climax of the tension was the disastrous civil war that has left such a mark in the history of America. ...read more.