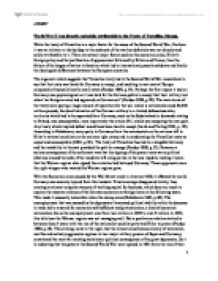 World War II was directly and solely attributable to the Treaty of Versailles. Discuss.

While the treaty of Versailles is a major factor for the cause of the Second World War, I believe it was an initiator to the buildup to the outbreak of the war but definitely was not directly and solely attributable to it. There are several major factors such as the economic crisis, Hitler’s foreign policy and the justification of appeasement followed by Britain and France, then the failure of the league of nation to function which led to international peace breakdown and finally the ideological differences between the European countries.

The argument which suggests that Versailles treaty led to the Second World War would have to say that the treaty was harsh for Germany to accept, and resulting in east-central Europe composed of mutually hostile small states (Purdue 1999, p.13). Perhaps the first impact it had on Germany was psychological as it was hard for the German public to accept that their military lost when ‘no foreign armies had appeared on German soil’ (Purdue 1999, p.28). The main terms of the treaty were paying a huge amount of reparation for the war which is estimated around £6,600 million pounds; the demilitarization of the German military to a limited defenseless state; territories which had to be separated from Germany, such as the Sudetenland or demands relating to Poland, was unacceptable; most importantly the article 231, which was accepting the war guilt. Any treaty which implied defeat would have been hard to accept (Lamb and Tarling 2001, p. 28) According to Hobsbawm, every party in Germany from the communists on the extreme left to Hitler’s national socialists on the extreme right concurred in condemning the Versailles treaty as unjust and unacceptable (1994, p.36).  The treaty of Versailles thus led to a vengeful Germany and the instability to the east provided the path to revenge (Purdue 1999, p.13). However a serious consequence of the settlement was that the signing of the peace treaty was a political albatross around the neck of the moderate left-wing parties in the new republic making it seem that the Weimar regime who signed the armistice had betrayed Germany. Those opponents were the right wingers who wanted the Weimar regime gone.

With the Economic crisis caused by the Wall Street crash in America 1929, it affected the world. Germany was severely injured from this incident. Private savings disappeared totally, thus creating an almost complete vacuum of working capital for business, which does too much to explain the massive reliance of the German economy on foreign loans in the following years. This made it unusually vulnerable when the slump came (Hobsbawm 1994, p.90). The unemployment that was caused by the depression threatened political stability while the decrease in trade led to a search for economic self sufficient and protectionism, a kind of economic nationalism. So as the unemployment rose from two million in 1929 to over 8 million in 1932, this tells how the Weimar regime was not managing well. But a positive correlation started in between these 3 years with the rise of the nationalist socialist party and Hitler to power (Purdue 1999, p.18). This striking move to the right, that the almost simultaneous victory of nationalist, warlike and actively aggressive regimes in two major military powers of Japan and Germany, constituted the most far reaching and sinister political consequence of the great depression. So it is indicating that the gates to the Second World War were opened in 1931 from the rise of their powers and hence could say that the treaty now was not the solely reason(Lamb & Tarling 2001, p.104) but only a contributor.

With discussing the early factors before and up until Hitler rose to power, it is no doubt that his foreign policies led to or at least were paving the road for war. Britain and France failed to deal with Hitler’s action after 1933. We can link Hitler’s actions with the policy of appeasement that Britain and France followed (even though it was introduced in 1937). Both factors are causes of the war as it was a failure for these two countries to react to the unilateral German denunciation of treaty of Versailles (such as the remilitarization) and notably its military reoccupation of the Rhineland in 1936 (Hobsbawm 1994) and the delaying to deal with the issue only allowed Hitler to have enough time to strengthen and built up the military. Britain’s primary task was to seek to reduce the likelihood of general war and to ensure it was not dragged into one if it did occur, since both Britain and France could not afford to go war, which is why they assumed that if they compromised Hitler’s demands, there would not be a war (Robbins 1997, p.12). In fact it led Hitler to be more confident and demand more such as uniting with Austria in 1938. The appeasers were unable to stop when he was still stoppable thus the balance of power started to tip off. Furthermore, they trusted Hitler for his word. That let them down as he broke the agreements and used force to take over Czechoslovakia with no reaction from the appeasers. While Hitler had no limits, it was only too late for the British and French to prevent him when he was invading Poland. This proved that the policy of appeasement was a failure in the long term as war did in fact break out as they had a delusion of temporary peace.

The creation of the League of Nations was an idealistic concept, though its inability to solve international crises eventually caused an imbalance in different parts of the world as well. The absence of America from the league was a problem itself and the poor institutional design was at fault but the mismanagement of the crises by the ‘powers’ in cases such as the invasion of Manchuria by Japan and Abyssinia by Italy could be held responsible. It was clear that Britain and France were mutually suspicious of each other. Resulting in each country following their interests rather than formulate a common policy to deal with the situation. The Great depression also had a big role in the failure of the league as well since the main weapon was to impose economical sanctions. The Britain’s desire for not wanting to get involved in any incidents was based on the fact that their economy was weak and France’s desires were to improve relations with Italy thus made them unwilling to impose such sanctions on Italy. Japan’s economy was bad which explains that they wanted to benefit from Manchurian resources (Lamb & Tarling 2001, p.96) and since no direct action was taken, it was a failed case. The lack of efficiency of the league and its failure to take an action in such cases against Japan and Italy, led to lose its prestige on a global level and eventually to its demise and a multi-polar, unbalanced arena. These events gave yet another opportunity for Hitler to take actions while.

We can see how this war could be considered as a war of ideologies. Ever since post-WWI, Soviet Russia emerged and established its Commintern International, it caused fear in the west and as a result they got separated into different sides. Also during early 20th century socialism and socialist parties were widely perceived as a threat and an alternative to authoritarian liberal governments alike; Western Europe feared the exportation of communism. So if Britain and France had to choose to ally with one against the other, the sensible reason for the choice was the least dangerous (Hitler-so they thought). There is a possibility to consider that the roots of appeasement were driven ideologically. Hitler was clear about his ideology against communism in his book and about creating the lebensraum. This could explain why he must have been more appealing to the west due to the ideology. It could be considered as well that the period from 1920s to the 1930s as an ideological conflict but it cannot be pointed exclusively the origin of the Second World War either. The path to war was torturous and involved shifting association between desperate ideological partners, while the foreign policies of the powers were determined by national interests and ambitions as well as by ideology (Purdue 1999, p.20-22). Fascism was unknown which could have caused a misunderstanding. Thus the concept of war against fascism rather than of a war between states wedded to a different ideologies and systems which was influential (Purdue 1999, p.179)

In conclusion, the Treaty of Versailles that supposedly ended the First World War  did not prevent the Second World War but nor did it cause it directly because during the 20 year period, there have been events that occurred which contributed to the start of the war as well. Unpredictable events can always change the course of the track. I believe based on the historical evidences, all the causes that I have written in this essay, have some blame to share for starting the war. Whether it was ideological difference, economical disasters, leaders’ actions, or the inability to fore see and understands the moves and motives of your enemy, they are all subjective to change thus the Treaty could not possibly be the one and only cause other than an initiator and a past shadow that will always be around during the 20 years.