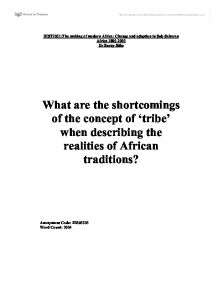 Change and adaption in Sub-Saharan Africa 1880-2000. What are the shortcomings of the concept of tribe when describing the realities of African traditions?

HIST2051:The making of modern Africa: Change and adaption in Sub-Saharan Africa 1880-2000 Dr Berny S�be What are the shortcomings of the concept of 'tribe' when describing the realities of African traditions? Anonymous Code: Z0365335 Word Count: 2004 The Oxford English Dictionary defines the word 'tribe' as "A group of persons forming a community and claiming descent from a common ancestor" or "A particular race of recognized ancestry; a family"1. The word has its etymology in pre-Roman history. The word 'tribus' was used to describe three distinct groups of people, supposedly involved in the founding of Rome. When Western colonialists arrived in Africa, they needed a mechanism to describe the social structures they found. The familiarity of the concept and its connotations seemed perfectly apt for the situation they encountered in Africa. The term was a product of their Classical education, part of their mental furniture, and it was in this way that the term 'tribe' came to be used to describe the people they found in Africa. They deemed 'tribes' to be equally primitive and so in need of 'civilisation'. 'Tribe' could also be used as an administrative tool as a method of cultural imperialism to distance "the other" and integrate this alterity into a known anthropological or ethnographic framework. ...read more.

On the other hand acknowledging these limitations provide a basis for separating what really constitutes African history and tradition. It does not limit discussion on the broader topics of descent, linguistic and political structure. "A conventional term for a social or political group defined in genealogical terms is 'tribe'8. In line with the dictionary definition of "claiming descent from a common ancestor"9, from a colonialist historians perspectives this is a widely upheld view, "In the history of Africa, kinship determined by ones ancestors and descent has been the most binding social institution"10.However this does not correspond with the realities of African life. The stress in African groupings is on kinship. From this Eurocentric historical perspective and the specific framework that entails, for example with knowledge of western family structures; we might forgive these accounts for presuming 'tribe's to be a reflection of biological descent. In reality the anthropological account put forward by Schneider who states "notions of biological relatedness cannot be presumed to structure peoples social relationships in other cultural contexts"11, is in fact much more accurate. 'Tribal' boundaries are not locked and solid but fluid and changing. ...read more.

Behind the realities of the inappropriateness of the word 'tribe' lie some deeply disturbing consequences for its persisting use, ones perhaps that modern governments are not willing to face. The legacy of the borders drawn by the white man in the scramble for Africa has become the black mans burden. Created units often cross political, religious and ethnic frontiers culminating in deep felt and violent crises. These divides are sometimes exacerbated by early imperialist ideology. Rwanda is a good example. In 1897 when German colonialists and missionaries arrived in Rwanda they promulgated ideas of racial superiority, heralding the superiority of the Tutsi 'tribe', the ruling class with their apparent Hamitic origins as more European, thus reinforcing their supposed supremacy. This accentuated 'tribal' difference and was ultimately the roots of the 1994 genocide where 500,000 Hutus were killed. The west saw this conflict as 'tribalistic'. This notion perpetuates the idea that conflict in Africa and the identity of the African people is somehow more primitive that in other parts of the world, leading to further misunderstanding, and inadequate intervention. As such the term 'tribe' not only misrepresents the realities of African traditions, it is a hindrance to African progression. ...read more.