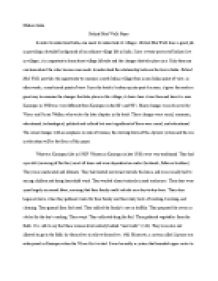 ﻿Modern India Behind Mud Walls Paper In order to understand India, one needs to understand its villages. Behind Mud Walls does a great job in providing a detailed background of an ordinary village life in India. Since seventy percent of Indians live in villages, it is important to learn about village lifestyle and the changes that take place in it. Only then one can learn about the cities because one needs to understand the relationship between the two in India. Behind Mud Walls provides the opportunity to examine a north Indian village from a non-Indian point of view; in other words, a non-biased point of view. Since the book is broken up into parts by years, it gives the reader a great way to examine the changes that take place in this village; it shows how it was then and how it is now. Karimpur in 1930 was very different from Karimpur in the 80?s and 90?s. Many changes were observed by Wisers and Susan Wadley, who writes the later chapters in the book. These changes were social, economic, educational, technological, political and cultural but most significant of these were social, and educational. ...read more.

The purdah declined except during ritual occasions. The dress style also changed. Head was less covered. They started to show more head and face unlike before. When women went out in the fields to work still wore long sleeve blouses and had their head covered. The ones who worked in their own courtyards or left their house briefly started wearing dhotis which was something shorter than saris and other traditional long sleeve garments that they wore. (193). This was a radical change. It really showed that times had changed and people were becoming a little more open-minded. The younger generation of women was far more educated than their mothers or sisters and also wore baggy pants (Panjabi suits) by 90s. At times they would refuse to help their female figures in preparing and collecting cow dung, calling it ?dirty.? They no longer had to collect water for their families since the introduction of hand pumps in their courtyards. This made their job a lot easier. Women also experienced change in their work. Due to the decline in the jajmani system and male employment in the farms, women no longer worked on the farms. ...read more.

Agricultural production was booming due to technological changes and introduction of necessary materials by the government to increase production. Better seeds, more fertilizer and more irrigation were provided by the government. One can credit increased education for more interaction between the villagers and the government officials. (252). Crops other than grains were produced and more number of farmers from all castes planted more crops and vegetables unlike only the Brahmins forty years ago. Green revolution also brought tremendous change in agriculture along with introduction of pumped irrigation water. Family incomes increased for many castes and access to land ownership also increased for middle and lower castes. The dominant Brahmin influence declined over the years but they still had a huge presence in the village. Overall, Karimpur in 1920s was different from Karimpur in the second half of the century. The reason why it was different was because of the changes in the roles of women over the years, the decline in the caste and jajmani system, and increased education. These changes were tied to each other and a change in one system brought a change in another. Finally, Karimpur serves as a model for modern India; it shows how a socially orthodox and economically backward place can experience changes at all levels in the society and improve the lives of its people. ...read more.