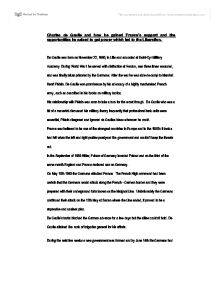 Charles de Gaulle and how he gained France's support and the opportunities he seized to get power which led to the Liberation.

Charles de Gaulle and how he gained France's support and the opportunities he seized to get power which led to the Liberation. De Gaulle was born on November 22, 1890, in Lille and educated at Saint-Cyr Military Academy. During World War I he served with distinction at Verdun, was three times wounded, and was finally taken prisoner by the Germans. After the war he was aide-de-camp to Marshal Henri P�tain. De Gaulle won prominence by his advocacy of a highly mechanised French army, such as described in his books on military tactics. His relationship with P�tain was soon to take a turn for the worst though. De Gaulle who was a bit of a maverick discussed his military theory frequently that professional tank units were essential, P�tain disagreed and ignored de Gaulles ideas wherever he could. France was believed to be one of the strongest countries in Europe and in the 1930's it took a bad fall when the left and right parties paralysed the government and couldn't keep the threats out. In the September of 1939 Hitler, Fuhrer of Germany invaded Poland and on the third of the same month England and France declared war on Germany. ...read more.

The collaboration between P�tain and Hitler continued and P�tain's policies continued to exceed demands i.e. when he started to deport Jews to German Concentration Camps in 1940. Unfortunately most French people excepted Vichy's policies without question and resistance tactics to the Germans gained little support. De Gaulle carried out radio broadcasts to try and make the French resist, and he is remembered for saying: "All who are collaborating should be stripped of authority - they are murderers". By May 1941 Germany and Britain were struggling for British control of Africa and the Middle East. The Free French Forces launched an attack against Vichy in Syria and the campaign was a success. De Gaulle had to defend French interests against British allies, which led to the question,who would control Syria? The quarrel over Syria ended the friendship between de Gaulle and Churchill. At the time of the Syrian crisis Churchill was meeting Roosevelt, and episodes of Syria had led to the dislike of de Gaulle by Roosevelt. He called him "unreliable, uncooperative, disloyal and a dangerous threat". On December 7th 1941, the Japanese attacked Pearl Harbour and America entered World War II. ...read more.

Unfortunately the Liberation success was short lived and France was ravaged by recrimination. Those people who had collaborated with the Nazis were humiliated and beaten and 1000's were executed without trial. The worst violence was seen when de Gaulle set up his government in Paris. P�tain was put on trial and took the blame for leading the collaboration and was sentenced to death but de Gaulle changed it to life imprisonment. Laval was executed. The war had left France in ruins and food was in desperate supply. De Gaulle toured the provinces to try and unite the country, fearing that it would be torn apart again by party politics. People accepted the need for discipline and de Gaulle's leadership for France although quarrels with allies continued. In February 1945 Churchill, Roosevelt and Stalin met, but de Gaulle was not invited. He took this an insult. In the next month Political parties in France demanded that their voices be heard. De Gaulle was a symbol of unity and refused to read a political faction, but without a party he found he had no real power. In January 1946 he resigned, with his mission almost complete, but he believed that the French would call him back on his own terms. 12 years later he returned to power, again during the crisis of war. ...read more.