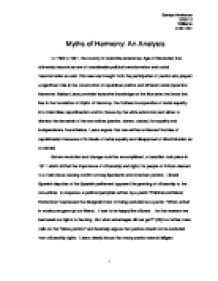 Myths of Harmony: An Analysis In 1795 to 1831, the country of Colombia entered an Age of Revolution that ultimately became an era of considerable political transformation and social transformation as well. This new era brought forth the participation of pardos who played a significant role in the construction of republican politics and different racial dynamics. Moreover, Marixa Lasso provides extensive knowledge on the illustrates the issue that lies in the foundation of Myths of Harmony: the fruitless incorporation of racial equality into Colombian republicanism and its misuse by the white aristocrats and elites to dismiss the demands of the non-whites (pardos, slaves, castas) for equality and independence. Nonetheless, Lasso argues that non-whites embraced the idea of republicanism because of its ideals of racial equality and disapproval of discrimination as a colonial Before revolution and change could be accomplished, a transition took place in 1811 which shifted the importance of citizenship and rights for people of African descent to a main issue causing conflict among Spaniards and American patriots. ...read more.

This happened with pardos. As pardos became more involved in the patriot movement they helped the creoles seize power over the Spanish but on the other hand both the creoles and Spaniards feared that the non-whites could escape their political control. Lasso effectively shows how pardos demand for independence was fueled not by harmony but by violence and force. Pardos soon served as congressmen and denounced the people who they believed were aristocratic and also demanded the election for their pardo candidate as governor through mob action saying it was "the will of the people" (81). Armed crowds of blacks and mulattoes backed by pardo artisans forced the Creole junta of Cartagena to elect Garcia de Toledo. The creoles saw this out of line. On the other hand it was seen as a "legitimate actor that influenced local politics (73)." The ineffective participation of the pardos soon led to the formation of two groups called the Pineristas and the Toledistas. Toledistas saw the mob attack as humiliating and therefore wanted to control the pardos and artisans. ...read more.

Lasso demonstrates how the elites became so entrenched in the idea of race war and radical republicanism of the nonwhites that they saw no middle ground between that and racial harmony. In the case of Marquez, "regardless of his personal political conduct and loyalty then, Marquez's mere presence as a pardo authority made him threatening. Racial grievances were seen as crossing the line because creoles truly believed that racial equality had been reached in some skewed form. Racial debates and expression of racial problems were therefore "expunged from legitimate public discourse" (143). Thus Lasso challenges that the elites delegitimized racial grievances to uphold the idea of racial harmony among the population. In a sense the elites convinced themselves of something that was virtually impossible. Lasso provides an insightful analysis on the racial discourses of this age of revolution. She ties in several views of independence and racial equality while demonstrating an era of social and political change. Overall Lasso provides an excellent model for the pardo point of view and successfully ties in race, class and nation. ?? ?? ?? ?? Soraya Anderson 2/20/12 Williams HIST 251 1 ...read more.