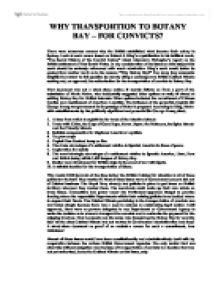 WHY TRANSPORTION TO BOTANY BAY - FOR CONVICTS? There were numerous reasons why the British established what became their colony in Sydney. Look at each reason based on Robert J. King's crystalisation in his brilliant work, "The Secret History of the Convict Colony" about Alexandro Malaspino's report on the British settlement of New South Wales. In any consideration of the issues on this subject this work should be seriously referenced with much admiration. King's work would better be quoted than another work as to the reasons "Why Botany Bay?" Too many lazy academics simplify the answer to this question by merely citing a contemporary British Cabinet Minute seeking and, on approval, the authorisation for the transportation of convicts to Botany Bay. That document was not a stand-alone action; it merely follows on from a part of the submission of Mario Matra, who incidentally suggested other options as well, all aimed at settling Botany Bay for British interests. Other options included the recruitment of Chinese Coolies and resettlement of American Loyalists. The influence of the powerful, Captain Sir George Young was paramount in the passage of Matra's proposal. According to King, Matra with embellishments by the politically significant and powerful Sir George Young cited; 1. A base from which to exploit the fur trade of the Aleutian Islands 2. Trade with China, the Cape of Good Hope, Korea. Japan. the Moluccas, the Spice Islands and the Friendly Islands 3. Suitable compensation for displaced American Loyalists. 4. To grow crops 5. ...read more.

30% perished from system brutality. Then there were the Canadians captured during disturbances in Lower Canada and transported to Sydney. Some remained in Australia after the main bodies of them were repatriated. What did Captain William Bligh do for Australia? Absolutely nothing! He is really only recalled for his great survival feat following the Bounty Mutiny. Big deal! In real terms, Bligh's achievement there pales in significance compared with the escape shortly afterwards of convict Nathaniel Lucas-Fowles of the Third Fleet transport "Atlantic" and others all unskilled in seamanship from Sydney to Timor. The later achieved without a Sextant and Compass, the tools the great seaman Bligh could and did to use. If it was not for the so-called Rum Rebellion, Bligh's visit here would not be remembered. As for the acclaimed perpetrator of the Rum Rebellion, John McArthur, well, if ever a character has been exaggerated for his contribution to Australian development, it is he. This man was no more than an otherwise self-enriching achiever. He didn't bring about the success of the Rum Rebellion as he has long been accredited at all. It was the convict women who made it happen. Major Johnston was urged on to arrest Bligh by some sixty citizens who petitioned him to so act. Mrs. Esther Johnston arrived in the first fleet aboard the "Lady Penrhyn". Of the thirty three married/partnered petitioners, seventeen were married or partnered to women who arrived on the "Lady Penrhyn" with Mrs. Johnston. Why did they do it? ...read more.

These people were selected from among the better types of prisoners held in British Gaols who were paroled on arrival to work in labour short area of that colony. These were mostly hardened criminals but of the remedial class. The success of this experiment was tremendous. Fremantle Gaol, later a notorious prison was in fact a barracks not a prison and held the convicts up until they could be placed with an employer. These were all men and in fact included several murderers and Rapists, types of crimes attached to a transported convict that were rare in Australia before then. The convict transportation ended in 1869 when the Western Australian labour shortages were overcome. It is not clearly known when the transported convict era ended. Most transported convicts still in the system in New South Wales were pardoned on1st June 1850. The Vandiemensland convicts faded away. The last is believed to have died in Hobart Gaol in 1904, held only because he had been institutionalized so long and not longer capable of surviving freedom. Western Australia abandoned them from1869 onwards to join society. The convict transportation system last 80 years and brought to Australia son 165,000 people. It attracted their families to join them. Few returned home. It is interesting to compare maps of Great Britain, one with areas showing the origins of the convicts and the other, the migrants. They almost match. For most people transported to Australia, the British colony of New South Wales offered a new and a better life. It should be pointed out in conclusion that the Wills of many of them reveal an extent of their assets which exceeded those of the peers of the Realm who dispatched them. ...read more.