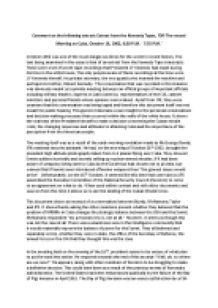 ﻿Comment on the following extract: Extract from the Kennedy Tapes, ?Off-The-record Meeting on Cuba, October 16, 1962, 6:30 P.M. - 7:55 P.M.? October 1962 was one of the most dangerous times for the world in recent history. The text being examined in the essay is that of an extract from the Kennedy Tape transcripts. These were a set of secret tape recordings that President J.F Kennedy had made during his time in the white house. The only people aware of these recordings at the time were J.F Kennedy himself, his private secretary, the two guards who manned the machine and perhaps his brother, Robert Kennedy. The conversation that was recorded in this instance was obviously meant as a private meeting between an official groups of important officials including military leaders, experts on Latin America, representatives of the CIA, cabinet ministers and personal friends whose opinions were valued. ...read more.

They showed Soviet soldiers hurriedly and secretly selling up nuclear-armed missiles. JFK had been aware of weaponry being sent to Cuba by the Soviet but had chosen not to protest, but warned that if Soviets ever introduced offensive weapons then ?the gravest issues would arrive?. Unfortunately, on the 16th October, it seemed like this time had come and so JFK assembled the Executive Committee of the National Security Council (Excomm) to come to an agreement on what to do. When used within context and with other documents and sources from this time it allows us to see the dealing of the Cuban Missile Crisis. This document shows an excerpt of a conversation between Bundy, McNamara, Taylor and JFK. ...read more.

This could have been as a result of the previous events of Kennedys administration. The United States had been embarrassed publically by the failure of the Bay of Pigs Invasion in April 1961. The Bay of Pigs Invasion was an unsuccessful action by a CIA-trained force of Cuban exiles to invade southern Cuba, with support and encouragement from the US government, in an attempt to overthrow the Cuban government of Fidel Castro. The invasion was launched in April 1961, less than three months after John F. Kennedy assumed the presidency in the United States. The Cuban armed forces, trained and equipped by Eastern Bloc nations, defeated the invading combatants within three days. The disaster at the Bay of Pigs had a lasting impact on the Kennedy administration and so Kennedy was cautious to rush into yet another mistake. ...read more.