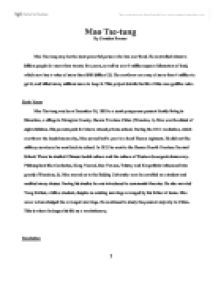 Mao Tse-tung By Camden Bruner Mao Tse-tung may be the most powerful person who has ever lived. He controlled almost a billion people for more than twenty five years, as well as over 9 million square kilometers of land, which now has a value of more than $980 billion US. He overthrew an army of more than 4 million to get it, and killed many millions more to keep it. This project details the life of this once godlike ruler. Early Years Mao Tse-tung was born December 26, 1893 to a semi-prosperous peasant family living in Shaoshan, a village in Xiangtan County, Hunan Province China (Wenxian, 1). Mao was the eldest of eight children. His parents paid for him to attend private school. During the 1911 revolution, which overthrew the feudal monarchy, Mao served half a year in a local Hunan regiment. He did not like military service so he went back to school. In 1913 he went to the Hunan Fourth Province Normal School. There he studied Chinese feudal culture and the culture of Western bourgeois democracy. Philosophers like Confucius, Kang Youwei, Sun Yat-sen, Tolstoy and Kropotlicin influenced him greatly (Wenxiam, 3). Mao moved on to the Beijing University were he enrolled as a student and audited many classes. During his studies he was introduced to communist theories. He also married Yang Kaihui, a fellow student, despite an existing marriage arranged by his father at home. Mao never acknowledged the arranged marriage. He continued to study the peasant majority in China. This is where he began his life as a revolutionary. Revolution July 23, 1921, Mao age 27 traveled to Shanghai to attend the first session of the Congress of the Communist Party of China. Within two years Mao was elected as one of the five commissars of the Central Committee of the party (Ch'en, 26). This initial success was short lived though. ...read more.

On the international front, the period was dominated by the further isolation of China due to start of the Sino-Soviet split, which resulted in Khrushchev withdrawing all Soviet technical experts and aid from China. The split was triggered by border disputes and arguments over the control and direction of world communism, as well as other disputes pertaining to foreign policy. Most of the problems regarding communist unity resulted from the death of Stalin and his replacement by Khrushchev. Stalin had established himself as the model of "correct" Marxist thought well before Mao controlled the Communist Party of China, and therefore Mao never challenged the suitability of any Stalinist doctrine (at least while Stalin was alive). Upon the death of Stalin, Mao believed (perhaps because of seniority) that the leadership of "correct" Marxist doctrine would fall to him. The resulting tension between Khrushchev (at the head of a politically/militarily superior government), and Mao (believing he had a superior understanding of Marxist ideology) eroded the previous patron-client relationship between the Soviet Union and the Chinese Communist Party (Lawrance, 115). Partly surrounded by hostile American military bases (including South Korea, Japan, Okinawa, and Taiwan), China was now confronted with a new Soviet threat from the north and west. Both the internal crisis and the external threat called for extraordinary statesmanship from Mao. However, as China entered the new decade the statesmen of the People's Republic were in hostile confrontation with each other. At a huge Communist Party conference in Beijing in January 1962, called the "Conference of the Seven Thousand," State President Liu Shaoqi denounced the Great Leap Forward as responsible for widespread famine. The overwhelming majority of delegates expressed agreement, but Defense Minister Lin Biao staunchly defended Mao. A brief period of liberalization followed while Mao and Lin plotted a comeback. Meanwhile grain was imported from Canada and Australia to deal with the worst effects of famine (Meisner, 132). ...read more.

political opponents as well as his belief in the overriding importance of unifying and revolutionizing China, regardless of the sacrifices imposed on his people, owed much to his understanding of Chinese imperial history. His political writings were influential in the development of Marxist thought and he also wrote poetry which retains some popularity in China. The ideology of Maoism has influenced many communists around the world, including Third World revolutionary movements such as Cambodia's Khmer Rouge, The Communist Party of Peru, and the revolutionary movement in Nepal. The Revolutionary Communist Party, USA also claims Marxism-Leninism-Maoism as its ideology, as do other Communist Parties around the world which are part of the Revolutionary Internationalist Movement (Maurice, 103). China itself has moved sharply away from Maoism since Mao's death. Many in mainland China regard Mao as a revolutionary hero in the first half of his life but hold that he was corrupt after gaining power. Contemporary views about Mao are affected by bans on some works that criticize Mao. The controversial Mao: the Unknown Story, by Jung Chang and Jon Halliday, provides a far less flattering picture of Mao than previous historical works do. Chang's book claims that Mao fabricated many claims about his background and youth to enhance his image as a true "people's hero." It likewise contends that details relevant to key events in the Long March (in particular the 1935 Battle of Luding Bridge) were falsified. Open academic discussion of Mao's life is restricted by the official "70% good, 30% bad" verdict (Maurice, 111). In conclusion I also find it very hard to pass judgment on whether Mao was bad or good for China. One dose have to acknowledge that Mao changed China from a weak chaotic country to an organized industrial machine able to compete with the other world superpowers. One could even go as far as to suggest the possibility that, because of Mao's direction, China is now in a position to surpass the United States as the main world power. ...read more.