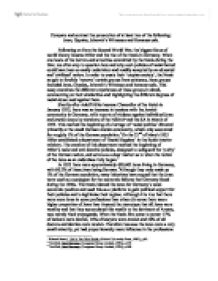 Compare and contrast the persecution of the Jews, Gypsies, Jehovah(TM)s Witnesses and Homosexuals in n**i Germany

Compare and contrast the persecution of at least two of the following: Jews, Gypsies, Jehovah's Witnesses and Homosexuals. Following on from the Second World War, the biggest focus of world history became Hitler and the rise of the Nazis in Germany. When one hears of the horrors and atrocities committed by the Nazis during the War, we often stop to question how and why such policies of racial hatred could have been so easily undertaken and readily accepted by an educated and 'civilised' nation. In order to create their 'utopian society', the Nazis sought to forcibly 'remove' certain groups from existence, these groups included Jews, Gypsies, Jehovah's Witnesses and homosexuals. This essay examines the different experiences of these groups in detail, commenting on their similarities and highlighting the different degrees of racial abuse used against them. Shortly after Adolf Hitler became Chancellor of the Reich in January 1933, there was an increase in tensions with the Jewish community in Germany, with reports of violence against individual Jews and Jewish shops by members of the NSDAP and the SA in March of 1933. This marked the beginning of a barrage of 'racial politics' directed primarily at the small German Jewish community, which only accounted for roughly 1% of the German population.1On the 22nd of March 1933 Hitler established a department of 'Racial Hygiene' in the Reich interior ministry. The creation of this department marked the beginning of Hitler's r****t and anti-Semitic policies, designed to safeguard the 'purity' of the German nation, and serves as ...read more.

By the end of the Second World War there was an estimated 5,721,000 Jews killed, some 68% of the entire European Jewish population.11 However, the experiences of other groups within n**i society were also fraught with persecution and injustice. One such example was the 'Gypsies' or Roma and Sinti. The persecution of Gypsies was taking place long before the Nazis came to power, largely due to their reluctance to live within the social norms of society. Their foreign appearance, strange customs and language, their nomadic way of life and their lack of regular employment all added to them being treated as social outcasts. Throughout the 1920s Gypsies had been treated as criminals (despite their lack of any crimes) with police in Bavaria and Prussia establishing special offices to keep them under constant surveillance, taking their photographs and fingerprints.12 When the Nazis assumed power the Gypsy threat acquired a new dimension, namely the poisoning of Aryan blood through mixed Gypsy-Aryan relationships. Although there were only 30,000 Gypsies in Germany at the time, eradication of this group became central to n**i ideology in order to cure Germany of any non-Aryan components in society. In December 1938 Himmler issue a 'Decree for the struggle against the Gypsy Plague' which introduced a tightening of the registration of Gypsies based on the recommendations of 'racial experts'. In response to the problem the Gypsies posed to the purity and 'honour' of the Aryan race, there were mass sterilizations of Gypsy men and women and in May 1940 2,800 Gypsies were sent to Poland along with Jewish transports, following Germany's victory over Poland. ...read more.

Consequently, as a result of the relaxed attitude towards them it is perhaps unfair to liken the experiences of Jehovah's Witnesses to that of Jews or Gypsies. In total only 1200 Jehovah's Witnesses died both in the lead up to and during the Second World War, therefore of all the groups they appear to have suffered the least persecution. In conclusion the experiences of Jews, Gypsies and Jehovah's Witnesses were all quite different under the n**i regime. While it is undeniable that all three groups were persecuted, they were not persecuted in an equal manner. While the Jehovah's Witnesses suffered through their religion, they ultimately had a choice as to whether or not to renounce their faith and return to a normal life with their families, both the Jews and the Gypsies experiences were much more sinister and inescapable. While it is undeniable that the Gypsies were subjugated to inhuman treatment, through their use in human testing and their sterilization, they seem to have been an afterthought within the n**i regime. On the other hand the systematic destruction of the Jewish people as a race marks a change in policy much darker again, as the Nazis sought not just to separate them from the Germany, but forcibly erase there existence from world history through a systematic and premeditated system of mass killing. Therefore, while the experiences of the three groups are useful in highlighting the different ways the Nazis tried to eliminate the threat to their regime and their ideology, there are vast gulfs between the levels of pain and suffering experienced by each of the three component groups. ...read more.