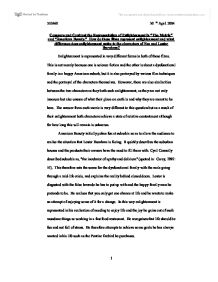 Compare and Contrast the Representation of Enlightenment in &quot;The Matrix&quot; and &quot;American Beauty.&quot; How do these films represent enlightenment and what difference does enlightenment make to the characters of Neo and Lester Burnham?

Compare and Contrast the Representation of Enlightenment in "The Matrix" and "American Beauty." How do these films represent enlightenment and what difference does enlightenment make to the characters of Neo and Lester Burnham? Enlightenment is represented in very different forms in both of these films. This is not merely because one is science fiction and the other is about a dysfunctional family in a happy American suburb, but it is also portrayed by various film techniques and the portrayal of the characters themselves. However, there are also similarities between the two characters as they both seek enlightenment, as they are not only insecure but also unsure of what their place on earth is and why they are meant to be here. The answer from each movie is very different to this question but as a result of their enlightenment both characters achieve a state of relative contentment although for how long this will remain is unknown. American Beauty initially pokes fun at suburbia so as to allow the audience to realise the situation that Lester Burnham is facing. It quickly describes the suburban houses and the products their owners have the need to fill them with. Cyril Connolly described suburbia as, "the incubator of apathy and delirium" (quoted in: Carey, 1992: 51). This therefore sets the scene for the dysfunctional family with the male going through a mid-life crisis, and explains the reality behind closed doors. Lester is disgusted with the false bravado he has to put up with and the happy family man he pretends to be. ...read more.

The world, Morpheus explains, exists "now only as part of a neural interactive simulation that we call the matrix." According to The Matrix, the conviction of reality based upon sensory experience, ignorance, and desire keeps humans locked in illusion until they are able to recognise the false nature of reality and relinquish their mistaken sense of identity. This similarly leads Neo to question whether he is making a success of his life and whether there is more out there. Lester asks himself similar questions and reacts very differently in quitting his job and buying a firebird. Neo, however, in the science fiction context realises that enlightenment in his form is through recognition of the fact that he is living in a world which is controlled by robots. He therefore realises that enlightenment lays not only in the recognition of this imaginary world but also his attempts to destroy this world and force enlightenment of the situation upon everyone else. In this way Neo is, initially at least, an unusually passive hero, like Lester, but he is eventually transformed into a mystical "Superman." In a similar theme as American beauty imprisonment becomes an intricate and vital theme as to the realisation and requirement for enlightenment from both characters. Imprisonment is offered in very different forms as one is suburbia and one is in a world controlled by robots but both have similar themes as they realise they need to break from their current lives and make a conscious effort to do something about it although both will find this very difficult along the way with often violent consequences. ...read more.

This lends more credibility to the process of enlightenment and in this way allows the audience to feel far more in touch with the film and emotions of the characters involved. Therefore, overall there are some comparisons between the two films as to how enlightenment is represented. However, I would say the most obvious difference is the gradual process of enlightenment in American Beauty in contrast to the obvious and visual portrayal in the Matrix. Both films use a climatic ending to finally recognise that both characters have been enlightened. It does this very strongly in both films but in very different ways. In one through enlightenment the man becomes a super hero whereas in the other through enlightenment the character eventually gets murdered. Therefore in essence as one is given the power to give life through is new found freedom, the others is taken a way as a result of his. American Beauty and The Matrix both recognise the benefits of enlightenment from the ability of being truthful and honest. It realises the need of being truthful and honest from having to keep up appearances and let things lead to boiling point. American Beauty suggests that enlightenment is key, however, it doesn't come cheaply and in the violent conclusion Lester is murdered as a result of this. Similarly in the Matrix violence is used as a preventative measure against enlightenment as it is feared that with the realisation of enlightenment and freedom there is no order and thus no control resulting in anarchy. Filmography American Beauty, directed by Sam Mendes, 1999. The Matrix, directed by The Wachowski brothers, 1999. Fight Club, directed by David Fincher, 1999. Word Count - 2900 532460 30th April 2004 1 ...read more.