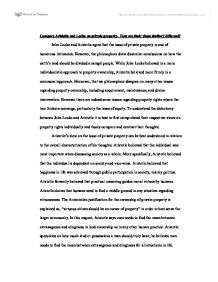 Compare Aristotle and Locke on private property. How are their views similar? different?

Compare Aristotle and Locke on private property. How are their views similar? different? John Locke and Aristotle agree that the issue of private property is one of numerous intricacies. However, the philosophers draw dissimilar conclusions on how the earth's land should be divided amongst people. While John Locke believed in a more individualistic approach to property ownership, Aristotle believed more firmly in a communal approach. Moreover, the two philosophers disagree on many other issues regarding property ownership, including acquirement, maintenance, and divine intervention. However there are indeed some issues regarding property rights where the two thinkers converge, particularly the issue of equity. To understand the dichotomy between John Locke and Aristotle it is best to first comprehend their respective views on property rights individually and thusly compare and contrast their thoughts. Aristotle's view on the issue of private property can be best understood in relation to the overall characterization of his thoughts. Aristotle believed that the individual was most important when discussing society as a whole. More specifically, Aristotle believed that the individual is dependant on society and vice-versa. Aristotle believed that happiness in life was achieved through public participation in society, mainly politics. ...read more.

naturally produces, and beasts it feeds, belong to mankind in common, as they are produced by the spontaneous hand of nature; and no body has originally a private dominion, exclusive of the rest of mankind, in any of them, as they are thus in their natural state: yet being given for the use of men." This relationship between man and the Earth allows private property theories to protect from environmental degradation. Locke believes that humans need to conquer nature in order to best serve mankind as a whole. Indeed he believes God intended for man to use nature to their benefit. However, Locke does decree that humans should also take great care of the Earth, as it is a divine gift. Additionally, he believes that humans should utilize Earth in an individualistic manner. This ideal also can be interpreted as supporting a more privatized, liberal approach to organized society. In this respect Locke believes that an ideal society tolerates all religious practices and an ideal government preserves its citizen's souls. Locke articulates this precisely when he states that "if there is a conflict between religion and government, one should obey the should and accept the punishment." ...read more.

Indeed Locke believes that the creation of currency was highly detrimental to the equating of the proper state of life for mankind. Alike to Aristotle he believes that money brings out the malevolence within humans, and that the social creation of money has hurt mankind. Specifically, Locke believes that many conflicts arise due to money, as man develops the ability to purchase another man's labor aided in the vast expansion of property ownership for the individual. This is because in purchasing labor, one man can now tend to more land that he alone could. Thusly some men are forced to work for other men rather than subsisting off of their own land, and in this respect Locke believes the "Sufficiency Proviso" is violated. Locke and Aristotle find a consensus in that money accumulation and property ownership should not be limitless. However, Locke also tries to justify the ability for all of mankind to subsist despite vast inequities of wealth. This is because private property ownership is highly productive - both in terms of production and environmental protection as people have an investment to protect. Therefore Locke appears to change his philosophy from an idealistic liberal prospective to that of a utilitarian. In doing so Locke first approaches a more Aristotelian view, but then digresses. ...read more.