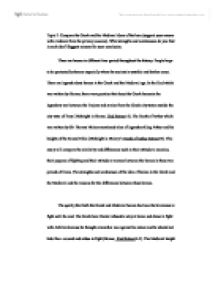 Compare the Greek and the Medieval ideas of the hero (support your answer with evidence from the primary sources). What strengths and weaknesses do you find in each idea? Suggest reasons for your conclusion.

Topic 2: Compare the Greek and the Medieval ideas of the hero (support your answer with evidence from the primary sources). What strengths and weaknesses do you find in each idea? Suggest reasons for your conclusion. There are heroes in different time period throughout the history. People hope to be protected by heroes especially when the society is unstable and battles occur. There are legends about heroes in the Greek and the Medieval age. In the Iliad which was written by Homer, there were poetries that about the Greek heroesin the legendary war between the Trojans and armies from the Greek city-states outside the city-state of Troy ( Mcknight in Homer, Iliad Extract A). The Death of Arthur which was written by Sir Thomas Malory mentioned tales of legendary King Arthur and his knights of the Round Table (Mcknight in Malory's Death of Arthur Extract H). This essay will compare the similarity and differences such as their attitude to enemies, their purpose of fighting and their attitude to women between the heroes in these two periods of times. The strengths and weaknesses of the idea of heroes in the Greek and the Medieval and the reasons for the differences between those heroes. ...read more.

He was angry because he got no thanks for struggling with the enemy all the days (Homer, Iliad Extract 9.2). For Achilles, he fought for reputation and prize, if he couldn't have what he expected he lost the ambition to fight. He just fought for property but bit for his country or justice. That is different from the chivalrous spirit of the Middle-Ages knights. The Middle-Ages knight should always help ladies, maidens and gentlewomen, or die. When Sir Bors knew that the lady in the high tower forced to find a knight against Sir Pridam, he immediately said that he would comfort her (Malory's Death of Arthur Extract 16.7). He helped her to fight in the combat without asking for any reward. It was his nature to help women in need. In contrast, the Greek heroes did not respect to women so much. Andromache cried and begged Hector not to fight with Achilles because she was afraid that he would be defeated and left her alone on the earth (Homer, Iliad Extract 6.1). His mother also wailed and wept to ask him not to meet Achilles in single combat because he was a savage (Homer, Iliad Extract 22.2). Despite that, Hector did not listen and he still attended the combat alone and at last defeated by Achilles. ...read more.

This is because they would rather have a glorious death than hold on to an insignificant life (Sowerby 1995:8). Therefore, once they were defeated, they would rather death than beg for life. For the Medieval knights, they were influenced by the Christian idea so much that they could not kill anyone and should give to their enemies as well. The Medieval knights fight for their loved ones because true love was important for them. Also there was a rule that they should help all kinds of women (Homer, Iliad Extract 1.2). For the Greek heroes, they did not fight for love because they thought glory was more important. They would rather fight for themselves or for their kings. They fought because they wanted to become famous and had the loot as reward. They are the reasons for the difference in the purpose of fighting. In conclusion, the Greek and Medieval heroes were all good at fighting and brave. However, the Greek heroes treated their enemies cruelly and kill them without any mercy but the medieval knights could not commit murder. The Greek heroes had ambition to fight for honours and glory while the Medieval heroes should fight for justice or love. Also, the Medieval knights could fight only for their loved ones but the Greek would not do that. These are also strengths and weaknesses in both the Greek and the Medieval heroes. ...read more.