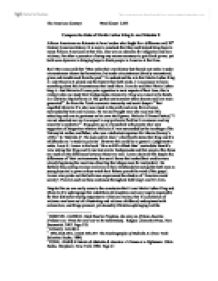 Compare the Roles of Martin Luther King Jr. and Malcolm X African Americans are fortunate to have leaders who fought for a difference mid 20th Century American history. It is easy to conclude that they each helped bring hope to many African-Americans at that time. One was an advocate for integration and non-violence, the other a promoter of using any means necessary to gain black power, yet both were dynamic in bringing hope to black people in America at that time. Karl Marx once said that "Men make their own history but they do not make it under circumstances chosen by themselves, but under circumstances directly encountered, given and transformed from the past." To understand the role that Martin Luther King Jr. and Malcolm X played and the history they both made, it is necessary to know something about the circumstances that made them. It can be said that Martin Luther king Jr. And Malcolm X were polar opposites in most aspects of their lives, this is evident when we study their backgrounds extensively. King was raised in the South, in a Christian Baptist home in 'the perfect environment where dreams and love were generated"1, far from the 'bleak economic insecurity and social despair'2 that engulfed Malcolm X's who was raised in the north and came from a home, surrounded by hate and violence. ...read more.

of blacks fight for 'dignity and respect' in the North.11 Both of the roles were to provide a voice to the two differing views within the American black community, Cone states that King (at least during the first stage of his civil rights activity) did not understand the depth of the problem of racism in the northern ghettos of America and Malcolm who often referred to the American dream as an 'American nightmare' couldn't have given the optimistic speech that King delivered to Washington D.C. in 1963 both men was nothing without they other, together their roles were the same, they fought for freedom, but individually they "symbolised opposite ends of black political thought"12 Generally there is an affinity to drain the radical message of a dynamic activist into an abstract icon, by this I mean to replace radical content with a pure image. People have often frozen King's ideological and political development in the steps of the Lincoln Memorial during the march of Washington 1963, King's "I Have a Dream" speech and his pacifist tendencies inspired by his Christian faith and others before him like Ghandi. However King's final years are the ones that are often forgotten or obscured; his commitment t to the struggle against the war in Vietnam, Kings policies became more radical in the latter years of his public life, ...read more.

Without each other there is a possibility that King would have just been a harmless national hero, and X a hero for the blacks' and ostracised by the whites'. King was an advocate for the South, and X for the North together they helped further the civil rights cause. In life they never joined forces, but death they are one in the common foundation of men who struggle and die for a cause bigger than themselves. 1 HORTON. JAMES O. Hard Road to Freedom, the story on African America (Volume two: From the civil war to the millennium). Rutgers University Press, New Brunswick. 2001. Page 119. 2 LOMAX. LOUIS E. 3 MALCOLM X, ALEX HALEY The Autobiography of Malcolm X, (New York: Balantine Books, 1984) 4 CONE, JAMES H Martin & Malcolm & America: A Dream or a Nightmare. Orbis Books. Maryknoll, New York. 1992. Page 41 5 KING. MARTIN L. Autobiography of Religious Development. Crozer Theological Seminary. 1949. 6 GOLDMAN. PETER The Death and Life of Malcolm X. (Urbana: University of Illinois Press, 1979) p. 6 7 CONE, Martin & Malcolm & America: A Dream or a Nightmare. Page19 8 THE HOLY BIBLE, The New Living Version. Galatians 3:28 9 By any means neccessary 10 KING. MARTIN L I have a dream speech Washington D.C 19th July 1962 11 CONE, Martin & Malcolm. Pages 89-91 12 HORTON. Hard Road to Freedom. Page 321 The American Century Word Count: 2,643 ...read more.