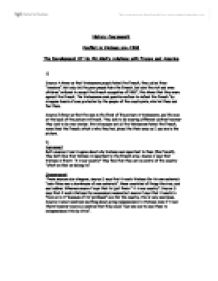 Conflict in Vietnam pre-1963 - The Development Of Ho Chi Minh's relations with France and America.

History Coursework Conflict in Vietnam pre-1963 The Development Of Ho Chi Minh's relations with France and America 1) Source A shows us that Vietnamese people hated the French, they called them "invaders". Not only did the poor people hate the French, but also the rich and even children "refused to accept the French occupation of 1883", this shows that they were against the French. The Vietnamese used guerilla warfare to defeat the French "by irregular bands of men protected by the people of the countryside, who hid them and fed them. Source B shows us that the men in the front of the picture is Vietnamese, and the man at the back of the picture is French. They look to be wearing different clothes however they look to be very similar, this is because not all the Vietnamese hated the French, some liked the French, which is why they had joined the their army as I can see in the picture. 2) Agreement Both sources C and D agree about why Vietnam was important to them (the French), they both feel that Vietnam is important to the French army. Source C says that Vietnam is theirs "it is our country" they feel that they are in control of the country "which we feel we belong to". Disagreement These sources also disagree, source D says that it wants Vietnam for its raw materials "indo-China was a storehouse of raw materials", these consisted of things like iron, coal and rubber. Whereas source C says that its just theirs " it is our country". Source D says that it wants Vietnam for economical reasons but source C says that it wants to "hold on to it" because of its "profound" love for the country, this is very emotional. Source C never mentions anything about giving independence to Vietnam even if it was theirs however source D mention that they would "Our aim was to lead them to independence little by little". ...read more.

Having met Ho Chi Minh the American's knew that he was "pro-ally", on the allied side so they would not let France take Vietnam back after this war. Source I is again like F as it mentions about Ho Chi Minh and the US being friends, it also says that they trained the Viet Minh in guerilla warfare. I know that they are friends because the Americans trained them "we trained these guys good". However the man it was written by (Major Al Thomas) seems a little worried about the fact that the Viet Minh were Communists "I was concerned that maybe this was a leftist (Communist) organization". They were friends otherwise America would not have trained them if they were the enemy. The one line that comes from source J is a direct order from President Roosevelt stating that France will not be allowed back in Vietnam "not to return Indo-China to the French under any circumstances, period!". This means that America are on the side of Vietminh, and this means that Vietnam will have freedom after world war two is over as France will not be allowed to return to Vietnam no matter what. Now I will use my own knowledge to try and explain why America stopped helping the Vietnamese in 1945. In source K, When major Al Thomas returns home he seems confused as to why the Americans have stopped their "war-time policy of helping the Vietnamese". This is because there have been changes. World war two was now over, Germany and Japan had both been defeated, however another war had begun the Cold War. This war was like no other, it was a war in which the west was against Communism. The USSR had taken over Eastern Europe now, and they were seemingly spreading Communism to lots of other countries. America had also had also undergone big change, there was now a new President (Truman). ...read more.

Stalin did everything in his power to stop them. However Stalin failed to do so, then on may 12th 1949 Stalin gave up and stopped the blockade. The arms race had begun as well, this was where America and Russia were having their own competitions being the only two super powers in the world. They each tried to get one over on the other by being able to create the most powerful weapon in the world. When Russia finally made the atom b**b it was more powerful than Americas, then they developed one of even greater destruction. Russia then made the Hydrogen b**b and so did America. One of their main tasks was actually to be able to put a man in space but Russia was the first to do this. Relations between Ho and the US could not get better, as after world war two the US were fighting against Communism. They could not be friends with Vietnam as they were Communists and this is what America was against, they did not like it. If they were to be friends there probably would be no point as there could be no trust between them. Conclusion When looking at the agreement part of things I can see that there was a good relation Between Ho and the US, as after the war America did not want France to get control of Vietnam again, they wanted them to remain free, they wanted this for Ho due to them being friends. Each individual who had written a source had liked Ho, all comments made on him were mostly good some not only liked him but also felt sorry for him and what he and his country had gone through. It was those people back in America who had not met him, like the President and leaders of the American forces who hated him as they did not know what he was like. On the disagreement part of things, there was bad relations, that's why America stopped their policy of helping Vietnam in the war and waged a war against Communism. ...read more.