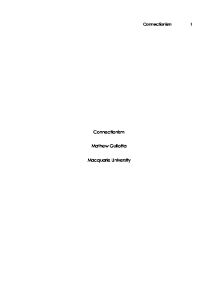 Connectionism Mathew Gullotta Macquarie University Abstract Connectionism is a revolutionary theory about how the mind works, loosely centered on the way the brain functions at the level of neurons and synapses. This essay critiques the connectionist model, with specific references made to the neurological plausibility of the model, the differences the connectionist model has with the classical theory of mind and the strengths and weaknesses of the model. This examination is conducted in order to make a conclusion of which paradigm, classical or connectionism, provides a better account of the theory of mind. Finally the current philosophical debate and resulting strains of connectionism which have emanated will be examined. It will be argued that connectionism, although not perfect, provides a more suitable basis for conceptualizing the mind. Connectionism According to Garson (2008), connectionism is the paradigm in "cognitive science which hopes to explain human intellectual abilities using artificial neural networks" (ANNs). ANNs are simplified models of the brain, which acts as a metaphor of cognition (Kashima et al., 2007), resulting in connectionisms main theoretical impetus as an alternative view to the classical theory of mind (Litch, 1997). Research indicates that the connectionist model has demonstrated human intellectual abilities such as learning, specifically human language (Rumelhart & McClelland, 1986); however this is highly controversial. It will be argued that connectionism provides a more suitable conceptual basis for theorizing the mind than classical theory. ...read more.

The test for successful training, thus learning, is for the model to correctly classify items outside the training set. Also, the way in which each theory states rules are acquired differs. The classical theory of mind insinuates there are innate syntactic rules which are initially programmed into the system. In contrast, the connectionist declares there are no innate rules for intellectual abilities, as rules are acquired through experience (Seidenberg & MacDonalds, 1999), and therefore are learnt. The classical model faces a problem, as when presented with a new input, the model will stop, until the input is explicitly programmed into the system. Instead, the connectionist model, as a result of automatic generalization, can recognize familiar aspects of a new input and continue to function (Garson, 2008). Automatically generalizing an input produces a stronger input-output relationship, consequently making quicker computations when dealing with familiar inputs. Furthermore, automatic generalization bares another advantage as ANNs can fill in missing parts of an input, whereas the classical model cannot (Poersch, 2005). Rumelhart and McClelland (1986) investigated whether the connectionist model could account for language by examining the acquisition of past tense English verbs, both regular (e.g. walk/walked) and irregular (go/went). Rules were not programmed into the network. The authors found that the network's development mimicked that of children, as both acquire and use language in a rule governed way. ...read more.