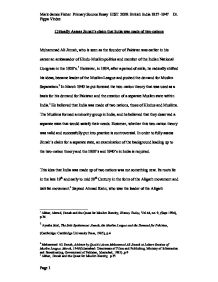 Critically Assess Jinnah's view that India was made of two nations.

Critically Assess Jinnah's claim that India was made of two-nations Muhammad Ali Jinnah, who is seen as the founder of Pakistan was earlier in his career an ambassador of Hindu-Muslim politics and member of the Indian National Congress in the 1920's.1 However, in 1934, after a period of exile, he radically shifted his ideas, became leader of the Muslim League and pushed the demand for Muslim Separatism.2 In March 1940 he put forward the two-nation theory that was used as a basis for his demand for Pakistan and the creation of a separate Muslim state within India.3 He believed that India was made of two nations, those of Hindus and Muslims. The Muslims formed a minority group in India, and he believed that they deserved a separate state that would satisfy their needs. However, whether this two-nation theory was valid and successfully put into practice is controversial. In order to fully assess Jinnah's claim for a separate state, an examination of the background leading up to the two-nation theory and the 1930's and 1940's in India is required. This idea that India was made up of two nations was not something new. Its roots lie in the late 19th and early to mid 20th Century in the form of the Aligarh movement and kali fat movement.4 Sayeed Ahmad Kahn, who was the leader of the Aligarh movement, was the first person to express this idea.5 The Aligarh movement was set up following the creation of the Anglo-Mohammedan College that for the first time was able to educate the Muslims who were not only seen as a minority but also backward in society.6 It not only helped embed or foster their sense of Islamic identity but also enabled them to make their distinction from the Hindus who were the majority group.7 Also, Mohammed Iqbal, the poet in the 1930's again expressed this idea of a separate Muslim Homeland.8 However, at the same he also expressed where this separate homeland for the Muslims should be ...read more.

the leader of Sikhs, Tara Singh in 1942 and 1943 to discuss the future of the Sikhs and their demands.42 However, this did not come to fruition as "Mr Jinnah rejected the idea of a separate state for the Sikhs or for any other minorities within a country that Muslims proclaimed as their homeland. Self-determination for national groups in zones where there is a majority was one thing; Self-determination for scattered minorities was another. There could be little question of separate states for non-Muslim communities in Pakistan as for a scattered Muslim community in the United provinces".43 Jinnah's rejection in terms of a separate homeland for the Sikhs is significant in undermining the two-nation theory because by determining his theory on religion in which Muslims and Hindus were concerned, Jinnah had overlooked the fact that these were not the only two religious groups in India. Also, it must be remembered that a nation is defined as a "large aggregate of communities and individuals united by factors such as common descent, language, culture, history, or occupation of the same territory, so as to form a distinct group of people".44 The Two-Nation Theory was based on religion alone, and therefore it did not take into account these other features.45 The Muslims only had a link through Islam.46 Despite this, The Muslims were divided and did not all share the same culture, language and ethnicity.47 These issues particularly came to surface where the Bengali Muslims were concerned. The Bengali Muslims did not believe that they had any similarities between themselves and the other Muslims of India.48 They believed that there was no difference between a Bengali Muslim and Bengali Hindu.49 Gandhi particularly compared the Bengali Muslims when he had said that "A Bengali Muslim speaks the same tongue that a Bengali Hindu does, eats the same food, has the same amusements as his Hindu neighbour, They dress alike. I have often found it difficult to distinguish by outward sign between a Bengali Hindu and a Bengali Muslim." ...read more.