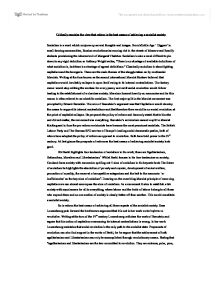 Critically consider the view that reform is the best means of achieving a socialist society.

Critically consider the view that reform is the best means of achieving a socialist society Socialism is a word which conjures up several thoughts and images. From Middle Age ' Diggers' in small farming communities, Russian revolutionaries running riot in the streets of Moscow and Scruffy students proclaiming the inherent evil of Margaret Thatcher. Socialism is also a word difficult to pin down to any rigid definition as Anthony Wright writes, "There is no shortage of available definitions of what socialism is, but there is a shortage of agreed definitions." Classically socialism is about fighting capitalism and the bourgeois. These are the main themes of the struggle taken on by continental Marxists. Writing at the time known as the second international Marxist thinkers believed that capitalism would inevitably collapse in upon itself owing to its internal contradictions. The factory owner would stop milking the workers for every penny and swift social revolution would follow leading to the establishment of a classless society. Marxism focused heavily on economics and for this reason is often referred to as scientific socialism. The first major split in the Marxist movement was prompted by Eduard Bernstein. ...read more.

The supporters of Bernstein's revisionism have, in time become the Social Democrats and gained political power. So has the power wielded by socialists pursuing a policy of reform given us a socialist state? Recent developments in the British Labour party, particularly the adoption of 'the third way' by Tony Blair do not bode well. The removal of clause 4 was for many the point at which the Labour party turned its back socialism. However the difference between Britain now and before the war, a period in which Labour has been in and out of power has certainly seen some changes for the better. Despite this capitalism still exists as the dominant ideology in all western states. Equal access for all, to everything certainly does not exist. Some may argue that the class divide has at least shrunk, however it is not the size that matters. Whilst living standards at the bottom end of the social ladder have risen, the wealth of the top bracket of society continues to rise as well. Whilst the existence of the class divide may not be such an uncomfortable experience for the workers it still remains. ...read more.

key area "the idea must encompass reform in every aspect of the countries life in which progress can be futhered"xii As with any species socialism will have to adapt to survive. Long has democratic socialism lived in the shadow of more extreme forms of socialism such as communist Marxism in Russia. I would argue that reform is not the best means to achieve a socialist society. Although it is the best means to pave the way for a socialist society. As Anthony Wright says when talking about the social democratic parties 'at least they have put the cards on the table' Perhaps the old idea of waiting for the revolution was right but now the old idea is almost dead. The internal threat from extremism has gone; perhaps it is time for the reform to become more extreme. i Rn Berki- Socialism p25 ii RAC Crosland- The future of socialismp68 iii Berki- socialism p 26 iv Lecture Notes- Syndicalism v Marxism and Politics- Milliband vi Social reform vs revolution. R Luxembourg p12 vii Essays in Fabian Thoughtp12 viii viii RAC Crosland- The future of socialismp66 ix Contemporary political Ideolgies, Eatwell and wrightp217 x Social reform vs revolution. R Luxembourg p 14 xi Social reform vs revolution. R Luxembourg p20 xii. ...read more.