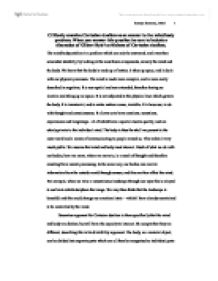 Critically examine Cartesian dualism as an answer to the mind/body problem. When you answer this question be sure to include a discussion of Gilbert Ryle's criticisms of Cartesian dualism. The mind-body problem is a problem which can only be answered, and even then somewhat sketchily, by looking at the most basic components, namely the mind and the body. We know that the body is made up of matter, it takes up space, and it deals with our physical processes. The mind is much more complex, and is more easily described in negatives. It is non-spatial and non-extended, therefore having no location and taking up no space. It is not subjected to the physical laws which govern the body. It is immaterial, and to make matters worse, invisible. It is however, to do with thought and consciousness. It allows us to have emotions, sensations, experiences and imaginings - all of which have a special elusive quality, and are utterly private to the individual mind. The body is thus the shell we present to the outer world and a means of communicating to people around us. This makes it very much public. We assume that mind and body must interact. Much of what we do with our bodies, how we move, where we move to, is a result of thought and therefore resulting from mental processing. ...read more.

It would however seem to follow that if this person decided to delve deeply into the working of his mind, he could, through introspection, discover his true desires, however repressed - assuming that the mind is not an uncontrollable phenomenon. Ryle argues that there is a basic contradiction in the concept of dualism, for if a mind is only viewable by itself, therefore accepting that we can know nothing about each any other mind than our own, we cannot even presume that other minds exist, let alone define them in any way. Yet we do this on a daily basis. We judge others' minds, laden them with traits and liken or disliken them to our own. This is simply because, through words and the exposition of our thoughts via our body many of us reveal how we feel and think. This would then explain why we are able to assume that we know people 'inside out'. Admittedly this may be a slight exaggeration, as much of the mind may remain entirely private, but still without the benefit of seeing into each others minds we can understand and relate to other people. Whether or not we are right in these judgements can never be certain. But with advances in psychology and seemingly precisely accurate observations into the minds of others, perhaps the brief glances we obtain into other minds become less dubious. ...read more.

He argues that Descartes and other dualists simply created a 'mental' process in order that it could differ from the physical process so it would not be subjected to mechanical laws. Mind has then gained an unnecessary stature. By allowing these 'mental' processes it would mean that the mind could be free and unsubjected to the mechanics which would adhere it to having no free will and thereby no "responsibility, choice, merit and demerit." He appears to think that Descartes was too sentimental and irrational to accept that the mind, like the physical world as according to Galileo, could be determined. If Ryle's theory were true, then the mind-body problem would be to all intents and purposes solved, for there would no longer be a problem. Statements about the mental process would be the same as statements about physical processes, which would then display themselves in our behaviour, subsequently somewhat a combination of both processes. But the problem still remains as previously stated that the mind can actually cause a physical response. Also, in theory (and often practice) there is nothing to stop people from cheating their natural behavioural response by simply reacting differently physically to something which their mind feels totally opposed to. Accordingly, if behaviour cannot represent the true process of the mind, we are reduced to a situation in which we can be certain of very little or nothing about what causes our actions beyond a purely physical level. 2 1 Rosalyn Kennedy, 100H ...read more.