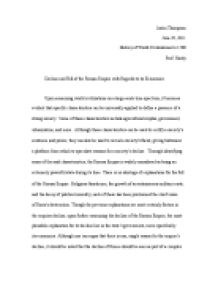 Decline and Fall of the Roman Empire with Regards to its Economics.

﻿Justin Thompson June 29, 2011 History of World Civilizations to 1500 Prof. Hardy Decline and Fall of the Roman Empire with Regards to its Economics Upon examining world civilizations on a large-scale time spectrum, it becomes evident that specific characteristics can be universally applied to define a presence of a strong society. Some of these characteristics include agricultural surplus, government, urbanization, and more. Although these characteristics can be used to certify a society?s existence and power, they can also be used to reveal a society?s flaws, giving historians a platform from which to speculate reasons for a society?s decline. Through identifying some of the said characteristics, the Roman Empire is widely considered as being an extremely powerful state during its time. There is no shortage of explanations for the fall of the Roman Empire. Religious fanaticism, the growth of an autonomous military caste, and the decay of political morality; each of these has been proclaimed the chief cause of Rome's destruction. Though the previous explanations are most certainly factors in the empires decline, upon further examining the decline of the Roman Empire, the most plausible explanation for its decline lies in the state?s government, more specifically its economics. Although one can argue that there is one, single reason for the empire?s decline, it should be noted that the decline of Rome should be seen as part of a complex process without a single, concise explanation. The decline of Rome was the result of a complex process of interwoven weaknesses, defects and contingencies. ...read more.

It can also be noted that the fact that the height of this decay corresponds with Constantine?s conversion of the empire from paganism to Christianity as a factor. This prompts the question, ?When people believe that the afterlife is the ultimate goal, and such qualities as meekness are desirable, how can those same people continue their ambition to conquer the world??[2] This viewpoint is however doubted by many, yet the underlying cause is considerably more complex and deeply embedded in the society and its development. The Roman Empire was riddled with social and political problems whose causes are to be found long before the third century. However, there were other serious problems developing during the empire that were independent of economic, political, and social factors. Problems with the army and the rise in military and political anarchy that ensued were very serious. Closely linked to the previous point is the weakening of the Roman military. Beginning in the 3rd century, it became customary to generate much and eventually the majority, of the force by creating loose alliances with barbarian tribes. Such groups of warriors were called Foederati, primarily composed of Germanic tribes led by Germanic chieftains. In hindsight, one can see the transformation of the Roman military from a force composed mostly of Italians in the early empire, to one where only the commanding elite was Italian at the beginning of the 3rd century, and finally to one that was virtually entirely barbarian for the century before the ultimate fall of Rome. ...read more.

The empire had dug itself into a hole from which it could not escape and went into terminal decline. The barbarization of the military beginning under Hadrian and the disastrous political effects of this were also very important. It was the legions that had repressed the Republic and it was the legions once again who violated the ?majesty of the purple?[6]. The civil wars, which were the result of this along with its political, economic and social problems, affected the empire to such an extent that it could no longer defend itself effectively against its enemies. By the fourth century such damage had been inflicted that the Roman world was never the same again and eventually went into terminal decline. Through an examination of Roman society throughout the later years of the empire, one is able to efficiently provide and explanation for its demise. In the case of the Roman Empire, its main deterrent was its economics. Through overspending, inflation, and universal greed; the Roman Empire was not powerful enough to sustain its level of dominance in the ancient world. As mentioned earlier, the decline of the Roman Empire cannot be defined through one specific event or factor but should viewed as a transition brought on by a combination of volatile factors. As Edward Gibbons states, ?The decline of Rome was the natural and inevitable effect of immoderate greatness. Prosperity ripened the principle of decay; the causes of destruction multiplied with the extent of conquest; and as soon as time or accident had removed the artificial supports, the stupendous fabric yielded to the pressure of its own weight. ...read more.