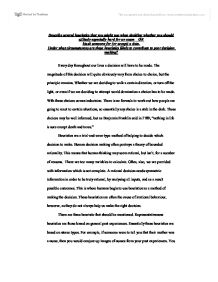 Describe several heuristics that you might use when deciding whether you should a) Study especially hard for an exam OR b) ask someone for (or accept) a date.Under what circumstances are these heuristics likely to contribute to poor decision making?

Describe several heuristics that you might use when deciding whether you should a)Study especially hard for an exam OR b)ask someone for (or accept) a date. Under what circumstances are these heuristics likely to contribute to poor decision making? Every day throughout our lives a decision will have to be made. The magnitude of this decision will quite obviously vary from choice to choice, but the principle remains. Whether we are deciding to walk a certain direction, or turn off the light, or even if we are deciding to attempt world domination a choice has to be made. With these choices comes indecision. There is no formula to work out how people are going to react to certain situations, so essentially any choice is a stab in the dark. These choices may be well informed, but as Benjamin Franklin said in 1789; "nothing in life is sure except death and taxes." Heuristics are a trial-and-error type method of helping to decide which decision to make. Human decision making often portrays a theory of bounded rationality. This means that human thinking may seem rational, but isn't, for a number of reasons. There are too many variables to calculate. Often, also, we are provided with information which is not complete. ...read more.

This is where the misconception would be, because the next girl is not part of his sample size, she is part of the woman population as a whole. The availability heuristic differs in that you would base your decision on the ease at which you could bring similar circumstances to mind. For example if you were playing basketball and thought about attempting a shot from far out, you would recall how often that shot had been made. The instances do not necessarily have to be from personal past experiences, they could also be the frequency that you had seen someone else make that shot. If one of your team mates had made the shot many times, then you may start to believe that you could also make that shot. This retrievability of instances can also be applied to asking someone out on a date. If you knew the person that you were asking out and knew a small history about other times they had been asked out, you could gage your decision on that information. If you knew that they had been asked out a great number of times but had the inclination to turn down all the offers that had been proposed this may deter you from asking that person out. ...read more.

When dealing with people it is next to impossible to come up with accurate statistical information. The likelihood of somebody actually working out percentage chances of being accepted is next to none. Given this a decision would have to be made between representative heuristic and availability heuristic. Each has its pitfalls and advantages. As asking someone on a date is a very personal thing, it would probably be a wiser choice to base your expectations on personal experience using representative heuristics. This could succeed in certain situations, but there are also situation with which it could be unsuccessful. All human beings differ in great ways, and personality is one of them. Perhaps the person you are asking out is extremely cynical, or your own personality is over confident. All these factors go into whether or not you almost rational decision would be successful. Rational decision always have been, and will continue to be used by humans the world over. Often they result in success, and often they do not. Perhaps some people are more rational than others, but this will not increase their likelihood of success. To reiterate the Benjamin Franklin quote : "nothing in life is sure except death and taxes". So with this in mind perhaps it is better to put that rational decision making aside and just take a risk. ...read more.