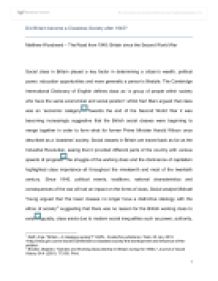 Did Britain become a Classless Society after 1945?

Did Britain become a Classless Society after 1945? Matthew Woodward - The Road from 1945: Britain since the Second World War Social class in Britain played a key factor in determining a citizen's wealth, political power, education opportunities and more generally a person's lifestyle. The Cambridge International Dictionary of English defines class as "a group of people within society who have the same economical and social position" whilst Karl Marx argued that class was an 'economic category'1. Towards the end of the Second World War it was becoming increasingly suggestive that the British social classes were beginning to merge together in order to form what for former Prime Minister Harold Wilson once described as a 'classless' society. Social classes in Britain are traced back as far as the Industrial Revolution, seeing that it provided different parts of the country with various speeds of progress. The struggle of the working class and the dominance of capitalism highlighted class importance all throughout the nineteenth and most of the twentieth century. Since 1945, political events, traditions, national characteristics and consequences of the war all had an impact on the forms of class. Social analyst Michael Young argued that 'the lower classes no longer have a distinctive ideology with the ethos of society'2 suggesting that there was no reason for the British working class to exist. ...read more.

hand, historians such as Peter Hennessy debated that the Second World War "accelerated and extended [...] so many other areas of national life"9, complimenting Ross McKibbin's studies which suggested that the working class had experienced a positive outcome from the war, as it boosted 'social esteem and political power' along with 'a mild redistribution of income due to the abolition of large scale unemployment'10. The British working class achieved better living standards, notably as the average weekly wage rose from �6 eight shillings in 1950 to �11 two shillings in 1959.11 This provided larger consumer opportunity, which arguably widened the working class as they started to indulge in the widespread luxury of booming consumerism. British Historian Jony Judt explained that with rising real wages, working class families could survive on the income of the primary wage earner, whereas if both parents worked, the family could taste the lavishness the affluent society. This increase in disposable income meant that many working class families could afford commodities such as cars and washing machines, which previously could only be afforded by the middle and upper classes. This is argued by Andrew Marr as he states "as they acquired their new cars and explored their new supermarkets [...] a new country was breaking through - brightly coloured, fashionable, less masculine."12 Thus showing the working class's centrifugal movement towards the ...read more.

On the surface, class was perceived as irrelevant and outdated as modern generations enjoyed the same education, opportunities, popular culture and leisure time which suggests that distinctions of the old social classes disappeared. However, this was not the case as we still define ourselves by our origins, as seen is 'Britain Today' (2007) where bank managers, traditionally a position of the middle classes, defined themselves as working class - showing that social mobility had increased opportunities although this did not affect the way define ourselves, this can be seen as Cannadine argued that "it is widely believed, both in Britain and abroad, that the British are obsessed with class in a way that other nations are obsessed with food or race or s*x or drugs or alcohol."17 Overall this indicates that Britain never was a classless society, despite social reforms that blurred the lines of distinction between the social classes and on the surface erased divisions within society. Below the surface people still defined themselves by their upbringing the social class of their parents, making it obvious that Britain remained a social divided nation, although this is seen as the younger generations as irrelevant. But this does not mean that they are any less important. ...read more.

This essay is a good attempt to answer the question and provides a reasonable argument and evidence to support it. It would be improved by exploring the definitions of class more closely, specifically whether it was economic, social or cultural, and whether this changed over time. This would give a more nuanced argument.