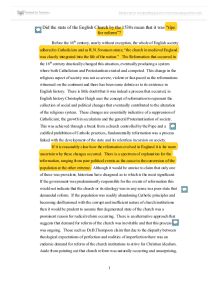 Did the state of the English Church by the 1530s mean that it was &quot;ripe for reform&quot;?

Did the state of the English Church by the 1530s mean that it was "ripe for reform"? Before the 16th century, nearly without exception, the whole of English society adhered to Catholicism and as R.N. Swanson states; "the church in medieval England was closely integrated into the life of the nation." The Reformation that occurred in the 16th century drastically changed this situation, eventually producing a system where both Catholicism and Protestantism existed and competed. This change in the religious aspect of society was not as severe, violent or fast-paced as the reformations witnessed on the continent and there has been some debate as to its existence in English history. There is little doubt that it was indeed a process that occurred, in English history Christopher Haigh uses the concept of reformation to represent the collection of social and political changes that eventually contributed to the alteration of the religious system. These changes are essentially indicative of a suppression of Catholicism, the growth in secularism and the general Protestantisation of society. This was achieved through a break from a church controlled by the Pope and a codified prohibition of Catholic practices, fundamentally reformation was a process linked with the development of the state and its relentless incursion on society. ...read more.

Slowly the state gained power over the church, for example gaining the authority to appoint Bishops, and this eventually led to conflict between state and church, especially with the Papacy. It is tempting to assume that the state will predictably compete with rival power bases in order to produce state hegemony in society. This creates a theory that the reformation and any other secularising reforms would occur at the behest of the state once it had gained sufficient power. This theory has a certain air of inevitability however, and it is obvious, as Haigh points out, that the reformation was far from inevitable. Thompson's ideas are still useful in explaining how the conditions came about that allowed for change to occur. He argues that the church, in order to maintain its dominant position, developed in response to the practical needs of the laity and during this process came increasingly under the control of the laity, who had more inclination to change the church for their own interests. Some historians concentrate on the failings of Catholicism in explaining the reformation, such as A.G. Dickens. He cites Lollardy as a key example of the dissatisfaction with Catholicism and attributes the rise of Lollardy and evangelism in England to the defects that existed in the church. ...read more.

The reformation was led by the government through statute and the trend of acceptance of Protestantism can easily be attributed to the growing power of the state. It remained far safer for individuals to conform to the state and many would benefit financially and in terms of status through the reformation. In conclusion it can be said that the political factors were the most significant although elements of anticlericalism made the reformation easier to bear. It is hard to see that a reformation could have taken place if there was not the need by Henry VIII to gain a divorce against the will of the Papacy and Charles V. Essentially the church was no less efficient or pious as it had been over the whole late medieval period but it was not able to resist the power of the state. Whatever condition the church was in was irrelevant; the coercive power of the Tudor state was such that it could impose its will on almost any subject. The reformation may be symptomatic of the transaction from late medieval to early modern England, the Catholic church was generally community based so the move towards a national community required a nationalised church, which Haigh claims was a primary function of the reformation. ?? ?? ?? ?? 1 ...read more.

The essay flows and has good style with a clear communication of ideas. There is a coherent argument that is developed and pursued. The inclusion of some more evidence from the period to exemplify and support the argument would improve some sections of the work. A range of historians views are examined and as the essay progresses there is more evaluation of the interpretations. This could be strengthened by examining how these historians have reached their views and what they have chosen to emphasise.