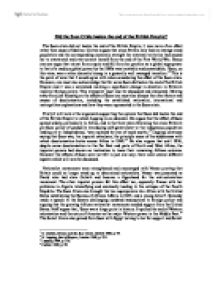 Did the Suez Crisis hasten the end of the British Empire?

in the turbulent wake of superpowers.'10 Britain also found that in the new atomic age the alternative prospect of having nuclear greatness seemed to be more tempting than possessing a vast empire, and a nuclear capability would move her nearer to being on par with the superpowers. Both the United States and the Soviet Union were anti-colonial in their outlook and ideas of self-determination for all people, stemming from Wilson's Fourteen Points, the covenant of the League of Nations, the Atlantic Charter and the charter of the United Nations, created a climate which made the possession of colonial territories seem intolerable. The United Nations also played a role in decolonisation since the newly independent nations, such as India and Sri Lanka, used the U. N. as a platform to isolate and embarrass the old colonial powers. As a result the U. N. passed the, 'Declaration on the Granting of Independence to Colonial Countries and Peoples,'11 which in effect made colonial rule a denial of fundamental human rights. Given such dramatic changes in international relations after the war the dissolution of empire can appear to be natural and inevitable with or without the Suez Crisis. The third factor to consider is the metropolitan or domestic pressures that Britain faced concerning decolonisation. Springhall argues that the ultimate decision of whether to pull out of colony lay with the British government and it had to take into account how important it was to maintain an empire in the light of the post-war economic situation and other domestic pressures. ...read more.

It did not create a revulsion against empire at home,' and, 'it did not destroy the will or ability of British governments to intervene to protect other British interests.'18 The real impact of Suez was more subtle and it reinforced the domestic and external constraints on British policy as well as highlighting the new pressures exerted on Britain which were derived from possession of an empire. I would tend to argue that Suez did not hasten the end of the British Empire, and that Suez was just part of the general process of decolonisation. One should take into account the domestic constraints that Britain was under to withdraw from Empire and at the same time the international and colonial-nationalist pressures to retreat from Empire became more intense. Consequently Britain had a plethora of causes for withdrawing from her empire and it was the combination of these causes that brought about the end of Empire. Suez was just one of these many causes. Finally, one can argue that the British Empire was never a fixed or static political entity and it had constantly expanded and contracted throughout its history and so one can argue that it was more of a natural or instinctive response by the British to make its imperial possessions more autonomous or grant independence in the post-war period. One can surely see now that the end of the British Empire was a rather natural process and I would have to agree with Carlton when he says that, 'Suez was a rather dramatic hiccup in a generally well-managed transition. ...read more.

This is a well researched and thorough response that display good understanding of the historiography and often uses clear examples and evidence to engage with historians. However, the author has taken a narrow view of the question and focused on Suez' effect on the empire, at the expense of other consequences such as the impact on Anglo-American relations.