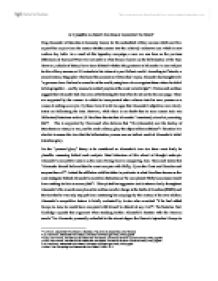 Discern the Aims of Alexander the Great

Is it possible to discern the aims of Alexander the Great? King Alexander of Macedon is famously known for his undoubted military success which saw him expand his empire from the eastern Mediterranean into the relatively unknown area which is now modern day India. As a result of this legendary campaign, a new era was born as the previous differences of East and West were set aside in what became known as the hellenisation of the East. However, schools of history have since debated whether the greatness of Alexander is reserved just for his military success, or if it extends to his vision of a pan Hellenic world. According to Plutarch, a second century biographer who based his account on Cleitarchus' report, Alexander had sought to be "a governor from God and a reconciler of the world; using force of arms against those whom he failed to bring together... and by reason, he united peoples of the most varied origin"1. Claims such as these suggest that Alexander had clear aims of hellenising the East when he set out for his campaign. These are supported by the manner in which he incorporated other cultures into his own persona as a means of uniting an empire. By these views it is fair to argue that Alexander's objectives were clearly intent on Hellenising the East. ...read more.

This shows that Alexander's original aim was to consolidate the empire he had inherited. In reality it was only after he had done this that he realised his competitive dreams could be satisfied as the success of his military campaign had given him inspiration and the need to raise revenue to maintain his army decided for him that he must continue his campaign. Evidently therefore it is assessable to view Alexander and his aims as expedient and pragmatic as essentially he did what he felt he needed to do as opposed to following his own ambitions. The theory of Alexander's pragmatism also answers for the overall outcome of the hellenisation process. Historians such as Hamilton lead the line in suggesting that Alexander's "policy of fusion" was a strategically and pragmatic approach to maintaining his empire whilst on campaign as oppose to the "God given mission" historians such as Plutarch and Wilcken allege it to be. This can be seen as Plutarch manifestly exaggerates the number of cities founded by the great conqueror. Wilcken supports this by claiming that the foundation of all these many cities was a "chief method by which, it is suggested, Alexander forwarded the process of Hellenisation"11. Indeed there is little doubt that places like Alexandria in Egypt and Alexandria-Charax were projected to develop into great trading outposts. ...read more.

Historians such as Plutarch and Hammond in particular give a highly romanticised view of Alexander as a "visionary with a spiritual dimension"17 who made it his aim to unite all peoples under his empire. This opinion is highly criticised by Bosworth who dismisses this argument as being built up by Asian folk-lore. This shows that when studying Alexander one must be aware of this transfixing legacy as the Greatest. In discerning Alexander's aims historians have to take into account that like most people, goals and aspirations change over time. The probability of Alexander developing one sole aim throughout childhood and then seeking to fulfil it is not impossible but extremely unlikely. To suggest that the twenty-year old newly elected King sought to expand his empire into the dominant Persian territories when he was facing internal threats is delusive. Instead it is more likely that Alexander's route was decided by pragmatic decisions. First he followed his father's policy, and in seeing his success and the need for revenue decided to go all the way. Secondly he managed to maintain his empire through his expedient measures to uphold a "policy of fusion". For many scholars it would seem that "it was the extent of his conquests that gained for Alexander his title of The Great"18. This is certainly plausible however as a conclusion it is surely the pragmatic manner in which Alexander gained and maintained his empire that warrants him the title 'Great'. ...read more.