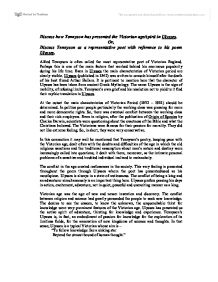 Discuss how Tennyson has presented the Victorian age/spirit in Ulysses.

Discuss how Tennyson has presented the Victorian age/spirit in Ulysses. Or, Discuss Tennyson as a representative poet with reference to his poem Ulysses. Alfred Tennyson is often called the most representative poet of Victorian England. Perhaps this is one of the main factors that worked behind his enormous popularity during his life time. Even in Ulysses the main characteristics of Victorian period are clearly visible. Ulysses (published in 1842) was written to console himself after the death of his best friend Arthur Hallam. It is pertinent to mention here that the character of Ulysses has been taken from ancient Greek Mythology. The name Ulysses is the sign of mobility, of refusing limits. Tennyson's own grief and his resolution not to yield to it find their mythic translation in Ulysses. ...read more.

The conflict in the age created restlessness in the society. This very feeling is presented throughout the poem through Ulysses whom the poet has presented/used as his mouthpiece. Ulysses is always in a state of restlessness. The conflict of being a king and an adventurer simultaneously is an important thing here. Ulysses prefers passing his days in action, excitement, adventure, not in quiet, peaceful and unexciting manner as a king. Victorian age was the age of new and newer invention and discovery. The conflict between religion and science had greatly persuaded the people to seek new knowledge. The desires to see the unseen, to know the unknown, the unquenchable thirst for knowledge were very prominent features of the Victorian age. Ulysses has presented us the active spirit of adventure, thirsting for knowledge and experience. ...read more.

We find the boldness of his will in the following lines - "...but strong in will To strive, to seek, to find and not to yield." In English literature, dramatic monologue became very popular through the efforts of Browning and Tennyson. Ulysses itself is a vivid example of dramatic monologue. Here he is delivering a speech to his mariners standing on the shore. He urged them to advance more and more in life despite all setbacks. The Victorian period is the time of transition from the pre-modern to modern age. In politics, science or social attitude everywhere a mode of change is taking place. Tennyson has presented his own age through Ulysses and his Ulysses seems to be more Victorian than Homeric. In this poem, Ulysses stands for the spirit of noble, untiring effort that is an important aspect of Victorian England. We may, therefore, rightly regard Tennyson as the perfect mouthpiece of his age, both in its merits and in its shortcomings. ...read more.