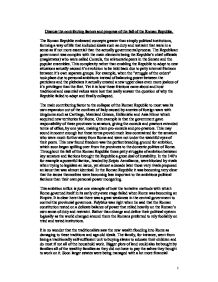 Discuss the contributing factors and progress of the fall of the Roman Republic. The Roman Republic embraced concepts greater than simply political institutions, forming a way of life that included ideals such as duty and restraint that were in a sense as if not more essential than the actually governmental process. The Republican government was complex with the main elements being the Republic's chief officials (magistrates) who were called Consuls, the aristocratic peers in the Senate and the popular ensembles. This complexity rather than enabling the Republic to adapt to new situations actually caused it's evolution to be held back due to petty internal frictions between it's own separate groups. For example, when the "struggle of the orders" took place due to personal ambitions instead of balancing power between the patricians and the plebeians it actually created a new upper class even more jealous of it's privileges than the first. Yet it is how these frictions came about and how traditional and essential values were lost that really answer the question of why the Republic failed to adapt and finally collapsed. The main contributing factor to the collapse of the Roman Republic to most was its own expansion out of the confines of Italy caused by a series of foreign wars with kingdoms such as Carthage, Mainland Greece, Hellenistic and Asia Minor which acquired new territories for Rome. One example is that the government gave responsibility of these provinces to senators, giving the consuls and praetors extended terms of office, by one year, making them pro-consuls and pro-praetors. ...read more.

Gaius Marius, a consul in 107Bc and from 104-100Bc, finally abolished the long-standing, traditional law that required men to own land before they could serve in the army. The law was originally thought to bring the assurance of loyalty in armies so naturally many traditionalists were shocked by this move, yet it did ease the "military crisis" in one sense. Unfortunately for the Republic this did not end the crisis in all senses, instead what is now known, as the "vicious nexus" became apparent. The stability of the men returning to their farms was lost meaning that the campaign had to be a profitable one to ensure that the discharge payments, usually in the form of land, could be met. As the Republic had not made automatic provisions for its men the armies and commanders were thrown together in mutual dependency, with the men wishing for help and support from their commander and the commander hoping that their gratitude would further his own political ambitions. Campaigns had to be profitable to ensure this balance was kept, an extremely difficult request or the commanders who we must remember were not professional but climbing the political ladder. The "vicious nexus" in truth pushed the Senate's needs into a secondary position. It may be because of this pressure and personal ambition, both not being controlled by the Republic that caused many generals to blackmail the Republic with the threat of civil war: Cornelius Sulla in 88 and 82BC; Pompey and Crassus in 71BC; Pompey, Crassus and Caesar in 60BC; Caesar in 49BC; and Octavian in 43BC. ...read more.

Like all the rest of the manoeuvres the Senate's "champion" was out-stratisized and brutally beaten by 48BC. For four years Caesar controlled the state until he was murdered for setting himself up as a "king" over the Republic, but also took make way for new ambition. The Republic represented so many ideals and institutions which as well as making it a wide and all embracing concept it also made it frustratingly intangible and it may be out of aggravation at not being able to come to grips with it that Caesar called it a "mere name without form or substance". In truth Caesar knew it's power was in the minds of the population as even though he was able to force his way through the laws and systems he was killed for being a risk to the foundation of the Republic. We admire how the Republic grew from a small collection of settlers to become a huge Empire yet in truth it was this expansion that undid the governmental system, leading to the forth stage of Rome - the Emperors. The old ways and systems could not control the new situations and people and rather than change the Roman's relied, sentimentally almost, on policies that did not support or protect the Republic. Ambitions, the "military crisis," civil wars, new ideals, the decline in pietas and people actively undermining the government's authoritas weakened the Republic greatly and led to many great lives being lost. What was the greatest problem was that the Republic's politics were so weak that they needed supervision and a suitable form could not be found: a stronger hand than Sulla was needed but not as publicallly feared and hated as Caesar. ?? ?? ?? ?? 1 ...read more.