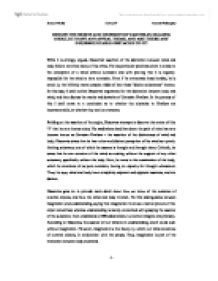 Discuss the merits and demerits of cartesian dualism. Should it have any appeal today, and are there any insurmountable obstacles to it?

DISCUSS THE MERITS AND DEMERITS OF CARTESIAN DUALISM. SHOULD IT HAVE ANY APPEAL TODAY, AND ARE THERE ANY INSURMOUNTABLE OBSTACLES TO IT? While it is strongly argued, Descartes' assertion of the distinction between mind and body fails to convince many of his critics. He has particular problems when it comes to the conception of a mind without extension and with proving that it is logically impossible for the mind to have extension. Even if he overcomes these hurdles, he is struck by the infinitely more complex riddle of how these "distinct substances" interact. In this essay I shall outline Descartes' arguments for the distinction between body and mind, and then discuss the merits and demerits of Cartesian Dualism. In the process of this I shall come to a conclusion as to whether the obstacles to Dualism are insurmountable, or whether they can be overcome. Building on the assertion of the cogito, Descartes attempts to discover the nature of this "I" that he now knows exists. His meditations lead him down the path of what has now become known as Cartesian Dualism - the assertion of the distinctness of mind and body. ...read more.

Nevertheless, it must be conceded that no body part could exist on its own (although the body is perfectly capable of surviving without a limb, a lung or a kidney for instance). This brings us to the next objection, that we cannot conceive of a mind solely as a thinking thing, existing without any form of extension. The mind itself rebels at the idea - a substance without extension, without any occupation of space, is not something we can conceive of as a substance, but more as a property or faculty. We can conceive of thought itself as without extension, merely something that happens, some process of the brain. Probably the most useful interpretation of mind from the point of view of defending Descartes is simply to see it as synonymous with thought. The mind is simply the faculty of the process of thought, and imagination is a specialised (though non-essential) form of thought relying on sensory information for its construction. Nevertheless, Descartes still has to show that it is logically possible for the mind to exist on its own, without being a part of an extended body. ...read more.

The most contraversial, and problematic, element of Descartes' argument is his insistence on the non-corporeality of the mind, which I have proved to be totally counter-intuitive and totally contrary to any understanding of modern physiology and neurophysiology. As Kenny argues, "Descartes' claim that an act of thinking or doubting needs no place and depends on no material thing...is simply preposterous". And the second major objection regards the interaction between body and mind. Descartes even admits that we are aware from experience that the mind acts on the body and vice versa. But since he defines mind and body as not merely distinct entities, but as mutually incompatible entitites, it is difficult to find how a causal flow between mind and body is possible. This is especially difficult as Descartes also argues that "causal transactions require some relationship of similarity between effect and cause" but, following Descartes' argument this should be simply impossible "given the logical gulf between them". Thus, we may conclude that Cartesian Dualism does indeed face 'insurmountable obstacles to it' and thus Descartes' account must be rendered a failure, in part due to his lack of medical understanding (as we understand the mind and body) but also due to his incompatible arguments. Ronan O'Kelly 07/05/07 General Philosophy - 1 - ...read more.