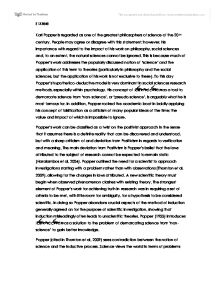 Discuss the reasons why Karl Popper is regarded as one of the Greatest Philosophers of Science of the 20th Century.

Karl Popper is regarded as one of the greatest philosophers of science of the 20th century. People may agree or disagree with this statement; however, his importance with regard to the impact of his work on philosophy, social sciences and, to an extent, the natural sciences cannot be ignored. This is because much of Popper's work addresses the popularly discussed notion of 'science' and the application of this term to theories (particularly in philosophy and the social sciences, but the application of his work is not exclusive to these). To this day Popper's hypothetico-deductive model is very dominant in social sciences research methods, especially within psychology. His concept of falsification as a tool to demarcate science from 'non-science', or 'pseudo-science', is arguably what he is most famous for. In addition, Popper rocked the academic boat in boldly applying his concept of falsification as a criticism of many popular ideas of the time; the value and impact of which is impossible to ignore. Popper's work can be classified as a twist on the positivist approach in the sense that it assumes there is a definite reality that can be discovered and understood, but with a sharp criticism of and deviation from Positivism in regards to verification and meaning. ...read more.

The observation of just one non-white swan will completely disprove the hypothesis. This is, therefore, a scientific statement by Popper's standards. However, despite the possibility of falsification of an inductive hypothesis, Popper believes it is flawed because he believes it to be too easy to find evidence that will corroborate any hypothesis. He explains this in relation to the swan-hypothesis by stating that if the scientist were to be shown a swan that was not white, the claim could be made that the theory has not been negated, but rather that the non-white swan would likely be a different, if similar, species to the white swan. This sort of reaction, by stripping the hypothesis from the falsifiability it once possessed, diverts the scientist from achieving true knowledge (Popper 1974, cited in Miller 1983). Without the possibility of the falsification of a theory, its hypotheses become "acts of faith" (Fife-Schaw, 2000, p. 357), and renders the theory tautological: the definitions of a swan includes the colour white, creating a circularity that sets up the theory to only predict future events to resemble past events (Haralambos et al, 2004). ...read more.

Problems have been raised (Latakos, 1970 cited in Thornton, 2009) regarding the truth of the variables that could falsify a theory. Popper's method of demarcation has been scrutinised for involving a priori of the existence of infallible ways in which to falsify or corroborate a theory. Winch (1958) believes that the near-obsession with deciding if a theory is scientific or not can distract from the most important goal of finding truth. The very existence of these carefully considered criticisms suggests the importance of Popper's work. Science is said to 'build on the shoulders of giants.' Popper's work has been built on and learned from to such an extent, that in the context research and philosophy of science he is, unquestionably, one of the proverbial giants. Such considerations of his work and attempts to improve on his theories fall in line with Popper's own attitude toward constructing good scientific theories for the purpose of seeking truth. Research is such a crucial aspect for the study of human behaviour, and Popper had a very distinct role in shaping the critical and (now generally considered) scientific nature of social science research. Word count: 1536. ...read more.